Holy Shit The New Castlevania Show Is So Awful 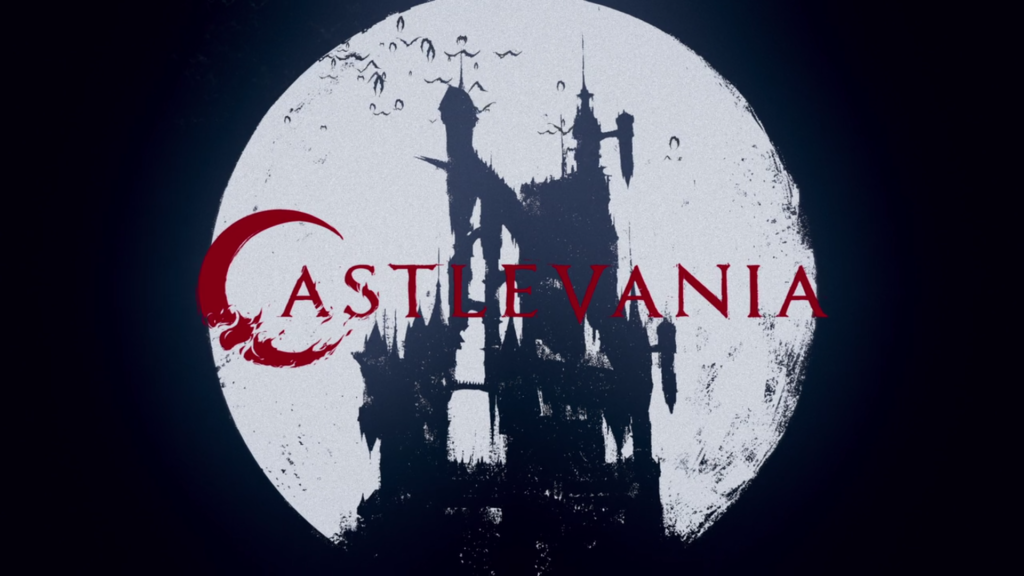 I’m not going to mince words here.  Castlevania, the new animated series from Netflix, is total and complete shit.  It’s bad.  It’s very fucking bad.  If the show was any longer than four episodes, I never would have finished it.  Now, before you say that the reviews are great, let me just set the record straight: everyone else is wrong.  They are very fucking wrong.  Despite how cool that title card is and how much my mind is telling me the show should be amazing, it’s seriously not.  I’m baffled that anyone in their right mind would associate the word “good” with this trash.  But here we are.  Let’s begin.

The most jarringly terrible part of this show is the animation.  It’s clearly inspired by anime but does a pretty horrible job at showing any respect for the art form.  Anytime characters make movements, it’s as though someone forgot to finish animating the scene.  And by the “scene,” I mean the whole show.  Every painful piece of this looks like it was done in Flash by one person at 2 AM over the weekend before it was due to air.  The lip flaps don’t match, the faces are stilted, Trevor Belmont’s beard looks like someone just drew an M that never ends, and every fight scene appears as though they just animated three frames: the beginning, middle, and end.  Nothing feels fluid, everything feels like a garbage.  It’s unfathomable that a powerhouse like Netflix can’t muster up the cash to make this look even half as good as something like Vampire Hunter D: Bloodlust, an America/Japanese anime venture also dealing with famous vampire/half-vampire characters, that came out seventeen goddamn years ago.

Frederator, the animation studio primarily behind this series, is by no means terrible.  They’re just terrible for this particular project.  Their previous work includes things like The Fairly OddParents, Wow! Wow! Wubbzy!, Adventure Time, and Bravest Warriors.  None of these are bad shows, but all of them have a very specific art style and are made for a largely similar audience: younger people.  It doesn’t appear they were ready for a transition of this magnitude, both in style and substance, and it shows at almost every turn. 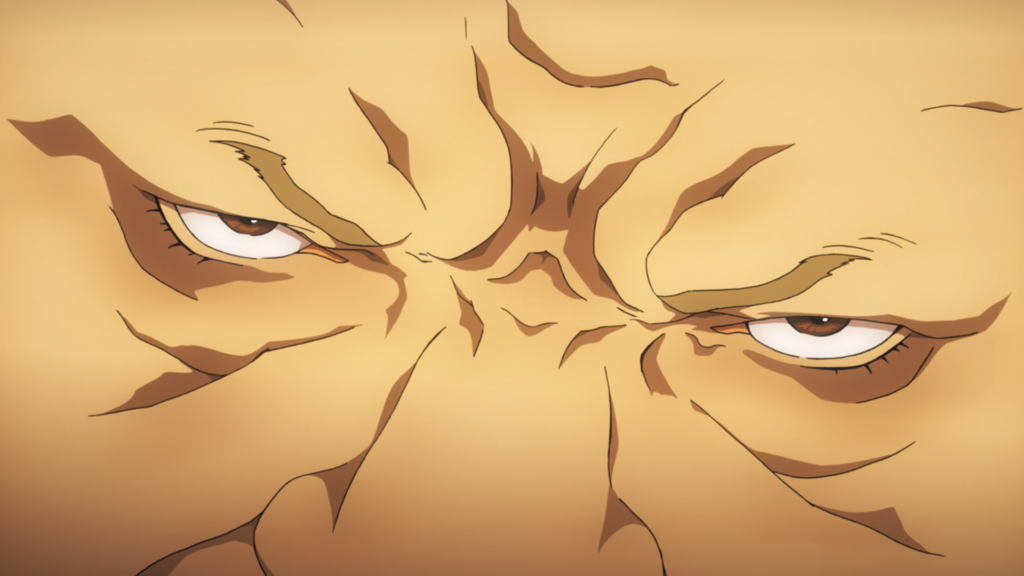 What in the fuck is this shot? Why does this exist?

The writing, which was done by Warren Ellis, has moments that shine through, but not very often.  It mostly feels like it’s been penned by a thirteen-year-old who has just recently started labeling himself as a “writer” and is very interested in vampires and swearing.  In a bar scene that is exposition-heavy as hell, the name Belmont is said sixteen times, along with discussions of bestiality that don’t pertain to anything.  “Would you please leave my testicles alone”  is another line that is said, out loud, by Trevor after being kicked in said testicles twice.  On top of all this, the most inappropriately “comedic” score cuts over the fight, but the scene is so incomprehensible that I cannot tell if it’s supposed to be played for laughs or to show that Trevor can hold his own in a drunken bar fight.  The tone is complete chaos, much like this entire show, which is shit.

The story itself is also confusing and uninteresting.  Dracula is portrayed as the main antagonist, but he’s only in one episode and his reasons for being super pissed honestly make sense.  The town burned his wife at the stake.  He gives the people a year to prepare for destruction and spares a woman that was friends with his wife.  So when he kills everyone 365 days later because no one listened, I don’t really feel bad for them.  The violence is entirely unearned at that point, so seeing a dead baby or a disemboweled kid is just an exercise in being thirteen and saying, “FUCK yeah DEATH and GORE!”  It’s not cool and it doesn’t service the story.  Our protagonist, I guess, is Trevor Belmont, who is wholly unlikable.  He wanders into town looking for kicks, which is the only reason he’s even involved in the plot at hand.  The true antagonist is the church, but spoilers, (fuckin’ whatever this show is so awful I’m doing you a favor) both the Archbishop and Bishop are killed off with LOTS OF BLOOD because it’s EDGY AS HELL so I guess we’re back to Dracula as the antagonist? 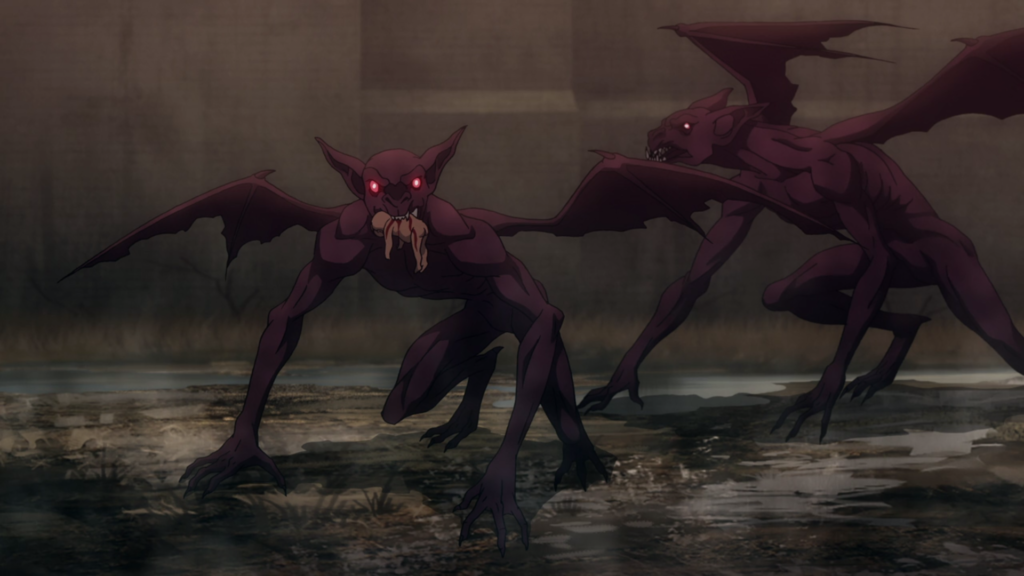 “And THEN, Trevor sees a demon just walkin’ by, BUT, get this, it has a FUCKIN’ BABY in it’s mouth! Sick, right?”

The second “fight scene” is a disaster, with lines like “Really?” spoken by someone in the 1400s, choppy animation for things that should look cool but don’t, and more tonally inconsistent music choices.  A priest’s eye is dislodged and it’s just so fucking stupid.  For a show that is only four episodes long, and “episode” is a word I use loosely here, there is a lot of talking.  None of it is really any good, and most of it is accompanied by boring, poor animation.  Directly following the priest fight, Trevor has a nearly eight minute exposition dump conversation with an Elder of the Speakers, a group of people who have a really interesting background that is ruined by just explaining it all in one excruciatingly long scene coupled with Trevor kind of walking around being unappealing in every way.

There is a pretty great fight with a Cyclops that happens during the third episode, despite the fact that the animation isn’t complete.  However, the goodwill is tossed away as the next fifteen minutes are just extended conversation scenes where nothing of importance happens, one of which involves the Bishop pronouncing the town of Gresit as Grey Shit multiple times and whispering some of the lines so quietly they’re almost inaudible.  I’d like to compliment the voice acting, but I can’t really even do that.  None of them are full-time voice actors, which is a very American thing to do.  Richard Armitage is serviceable as Trevor, but that’s the best you can say for anyone in this show.  Half the time it sounds like he’s doing a table read and they just recorded that session and used it in the episode.  None of the actors are bad, but I sure as hell wouldn’t call them good either.  They’re trying their best with the shit they were given, and their best just happens to be as middle-of-the-road as you can get.

The one great fight scene happens at the very end between Trevor and Alucard, son of Dracula.  Although the reasoning behind how it happens is shaky and the dialogue, true to form, has some cringe moments, the fight itself is great.  That’s it though.  That’s all there really is.  In four episodes, this is the only good part and it clocks in under 180 seconds.  The fact that the name Belmont is again uttered an astounding thirteen times in the two minutes leading up to the fight doesn’t do it any fucking favors. 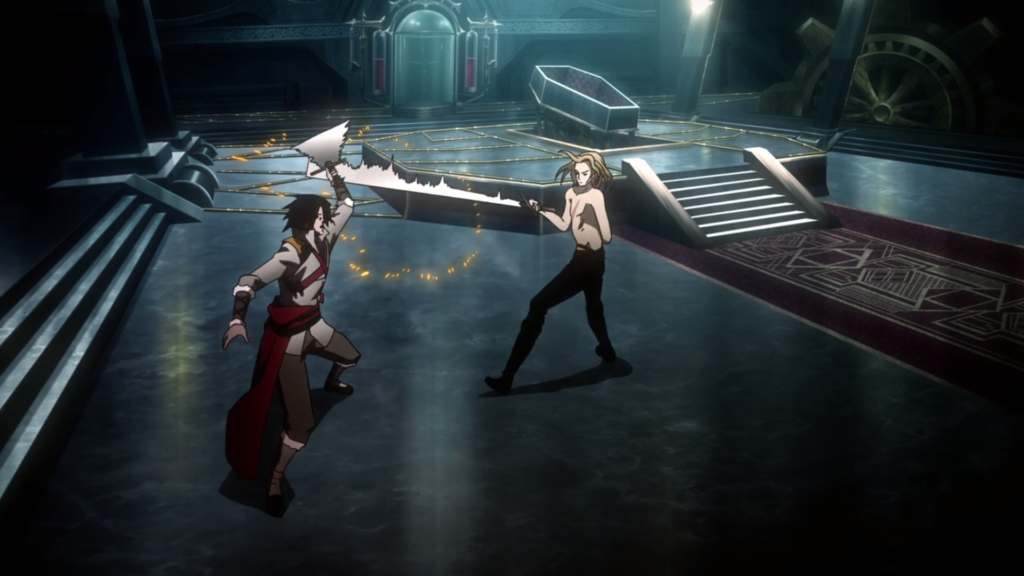 Other big, dumb, terrible moments of the show include:

– An actual conversation between the Bishop and a demon thing goes as follows:

Bishop: I have done His bidding!  My life’s work is in His name!
Demon Thing: Your life’s work…makes Him puke.

Makes him puke.  Warren Ellis wrote that line down, showed it to people, and no one stopped him.  It was later spoken by an actor into a microphone, recorded, and used in a real show called Castlevania, but not for comedic effect.  It was played straight.  It’s meant, somehow, to be serious.

– Trevor turns an entire mob of people on a priest simply by saying a few sentences about what a bad guy he is.  A mob of people who, mere moments earlier, wanted to kill Trevor and the Speakers.  Their minds are changed with terribly written dialogue/logic and no proof whatsoever that the priest has done anything to wrong them.  They don’t actually speak or voice an opinion.  They don’t ask any questions.  They just run and stab him.  A lot. 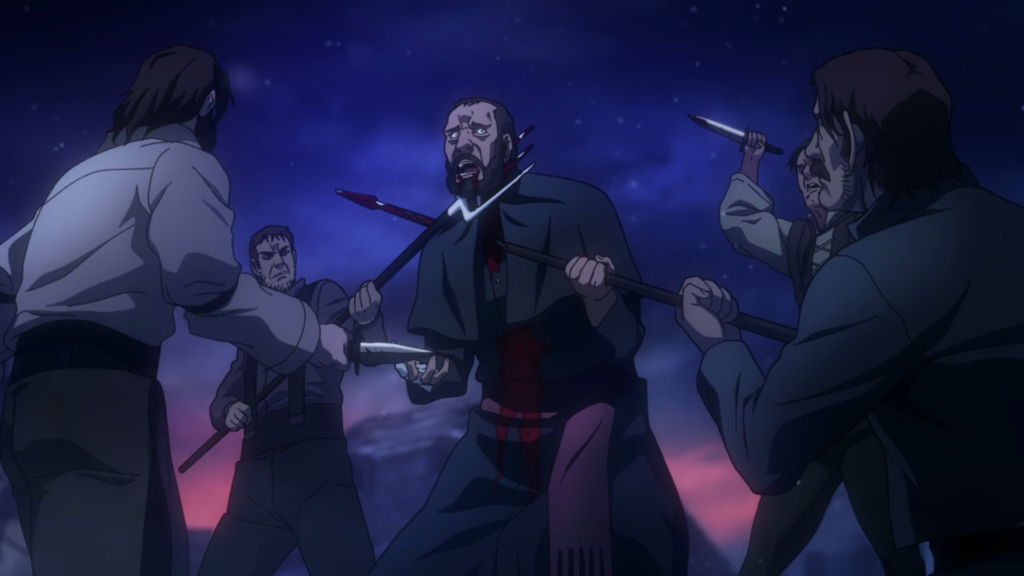 Here is a scene that makes sense and is well animated.

– “There’s an army of us!  AN ARMY!  FROM HELL!”  These are words spoken by a demon before he is chopped in half by a whip, kind of, because the animation is horrendously ill-equipped to tell this story .  It is not played for laughs and it’s a problem.

– Every priest in the city has a goddamn blade and brandishes it.  The number of frames used to show this action are shockingly low.

– Trevor’s backstory, he’s a Belmont and the church excommunicated his family for hunting vampires and monsters, is awkwardly shoehorned into conversation more than once, and one time was honestly too much.  Each time takes several valuable minutes.

The show is a jumbled mess.  It cannot be stressed enough that it looks like the entire thing was done in a weekend.  If this was a animation project done by a fan of the original games, I’d be pretty impressed.  But it’s done by a company, and one with a mostly well-received pedigree.  It’s unacceptable and I’m still trying to process how something this bad was given the green light AND undeserved praise from the community.  Why would you like this?  Why would you want more of this?  There is a second season already confirmed, this time with eight episodes.  I’m not excited at all, but I have a feeling I’ll want to watch it to see if anything has changed.  Ugh. 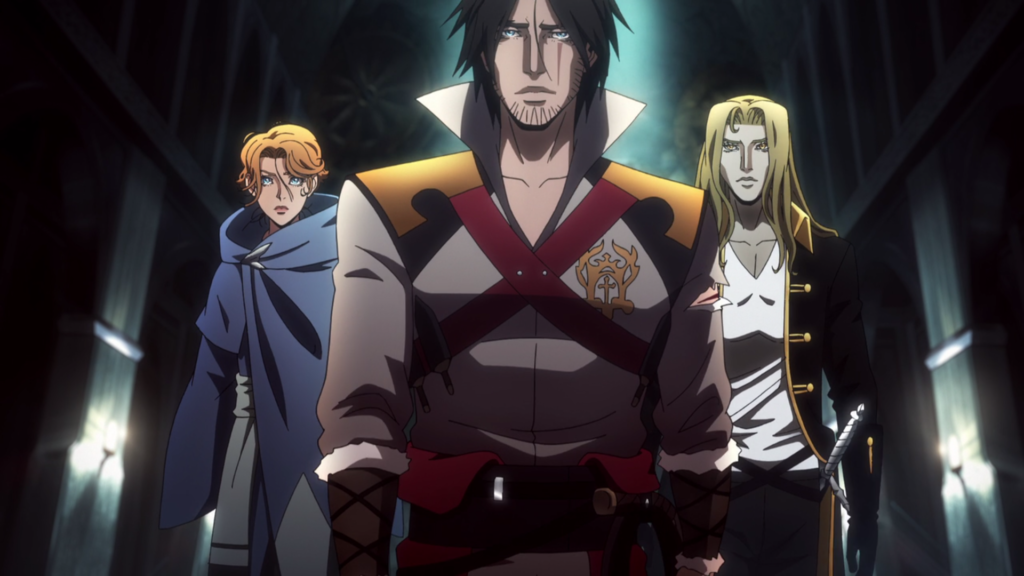 BUT WHERE’S GRANT? AM I RIGHT? Grant was smart. Grant stayed away.

It must be stated that the intro credits sequence is pretty rad, which is surprising since it has animation.  The backgrounds in most scenes were also really beautiful, unsurprisingly because there was no animation.  The two fights were fun, but choppy as hell.  That’s about it really, so you know, don’t watch any of this.  It’s still appalling.  During my writing I wound up just watching Vampire Hunter D: Bloodlust again, so at least I smiled at some point.  If you’re looking for a high-quality vampire anime, just watch that instead.

Don’t watch Castlevania.  I feel the need to reiterate this because the internet seems to be extremely fucking lost at the moment about the value of this show.  Do not watch Castlevania.  It’s very, very, very bad.  The only reason to watch it is to bring your critique to the front of this very lopsided battle.  Don’t just brush it aside because “whatever man, Castlevania got an adaptation, it’s still cool!”  First of all, no it’s not.  Secondly, supporting this only leads to further mediocrity.  Demand more from your favorite stories and characters in the video game world.  Don’t settle just because it happened.  You don’t deserve to settle.