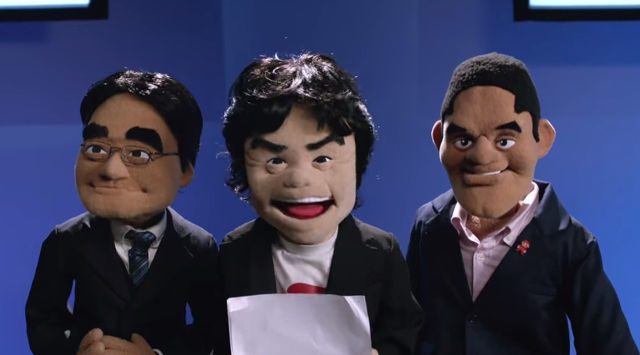 Nintendo recently held their E3 Digital Event.  With what appeared to be a firm grasp on what fans wanted to see, the video opened with a comical skit employing puppet versions of President of Nintendo of America Reggie Fils-Aime, President and CEO of Nintendo Satoru Iwata, and famed video game designer, producer and Nintendo’s only card left to play, Shigeru Miyamoto.

With Star Fox Zero as the first game announced, things were looking up.  As iconic game character Bubsy would say, “What could possibly go wrong?”  However, after the initial preview, the video devolved into announcements about games previously reported at last year’s E3 and games everyone already knew existed.

“Yeah, we didn’t really give a fuck,” said Iwata as nonchalantly as possible.  “I mean, you didn’t actually buy a Wii U did you?  God, why?”

Viewer’s hopes and dreams for something, anything at all that was new, were completely shit on during the last 45 minutes of the video presentation.  Although games like Super Mario Marker, Xendoblade Chronicles X, and Yoshi’s Woolly World all looked wonderful, they also looked wonderful the last fifteen times they were seen.

“Here you go you dumb fucks, some scraps for you,” Fils-Aime said as he tossed a quick view of a few games for the 3DS, a system that isn’t dying or in desperate need of new IP or, you know, games in general.  “What?  Shut the fuck up, we have a Zelda title in there.  Three Buddies Heroes?  Who cares, you’ll buy it you sheep!” said Fils-Aime while not giving any fucks.  “Plus like, forty seconds of Mario Tennis Explosion or something?  See, that’s new, fuck off.”

When pressed for any reason to why their digital event was so lackluster and depressing, both Iwata and Miyamoto laughed nervously.  “I have no idea what you’re talking about,” stuttered a clearly uncomfortable Iwata.  “I’m gonna borrow a page from ol’ Cammie Dunaway and say keep on playin’ Super Smash Bros., keep on playin’ Mario Kart 8, keep on playin’…uh, keep on…playin’…”  Iwata then trailed off and began to stare into the distance.

“Help…God, please help us,”  Miyamoto choked through his tears.  Both Nintendo employees then broke down and cried.  At press time, Nintendo Tree House Live continued to play the only two interesting games they had on loop, for hours, hoping that no one would notice.  In the end, at least there are puppet gifs.

If only I could be this excited for Nintendo…

“That’s it, I’m outta here, you can’t make me!” beloved and top tier mascot Bubsy stated as he left the convention center.