The 80’s were a golden time for Batman. His relevance had been slowly dropping off since the cancellation of his campy 60’s TV show, despite Dennis O’Neil and Neal Adams’ beloved Bronze Age gothic overhaul in the comics. Then, like a bolt of lightning on a stormy night, came Frank Miller’s The Dark Knight Returns, showing an older Batman coming out of retirement to save Gotham City from chaos. It was grimy, fast, and violent, and it smashed the tired Batman mythos’ teeth and spun it in a new creative direction. 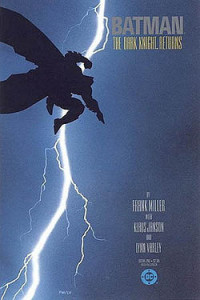 After DC Comics’ universe-altering Crisis on Infinite Earths maxiseries, the Dark Knight was in need of a new origin story, one more befitting of his grittier, tooth-smashing-er direction. Frank Miller returned to write Batman: Year One, a superhero story so close to perfect it’s been the untouched cornerstone of Batman’s mythology for close to thirty years. Other writers and artists were eager to make their mark in this exciting, fresh world of Batman’s early adventures and a new mythology was quickly built around it. Taken all together, it’s a compelling noir-ish saga showing how a rookie Batman, then-Captain James Gordon, and passionate District Attorney Harvey Dent pried loose the iron grip of organized crime from Gotham. Of course, all these new costumed villains are trying to fill the void, but they won’t be a problem, will they? Nah… 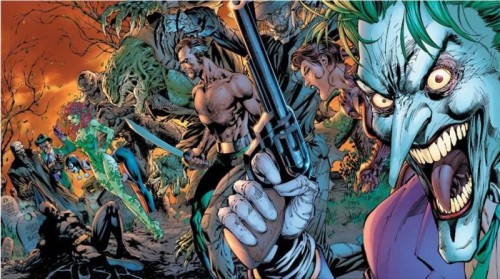 Something I need to mention before we get started. The time placement of stories set in Batman’s early days was haphazard, with no plan as to how those stories would interconnect. Thus, many details overlap or contradict. For instance, a book may have a throwaway reference to a villain whose origin story would actually be told in a book which fits later in the timeline. However, I hope you’re not going to let yourself get snagged on details. No matter how much of a stickler you are, remember that I write articles organizing comic book trade paperbacks, making me Supreme King Stickler, and I enjoy these stories just the same! 1) Batman: Year One – If you buy only one book on this list, it should be this one. This book traces the arcs of Batman and James Gordon from their respective (simultaneous) entries into Gotham and through their early struggles as good men in a city gone holy-shitballs-we’re-all-screwed terrible.

It is also our first post-Crisis look at Alfred, District Attorney Harvey Dent (later Two-Face), and Catwoman, as well as our introduction to new characters who will loom large in the new “Year One” setting such as the Roman, Gotham’s untouchable crime lord. I should add that this book was heavily referenced, in content and in style, in making the Batman Begins movie, which you might have heard of (Collects Batman #404-407, February – May 1987). This is also the chronologically earliest appearance of the Roman’s crime-y associate Sal Maroni, as well as our introduction to the modern Hugo Strange, main villain of the video game Batman: Arkham City (Collects Batman and the Monster Men #1-6, January – June 2006). 3) Batman and the Mad Monk – The second part of Matt Wagner’s Modern Age restructuring of Batman’s earliest tales. Here, the Dark Knight turns his attention to the leader of a vampire cult while his romantic life goes into a death-spiral. We also get to see the first Batmobile, and a cameo appearance by Catwoman in her first confrontation with Batman since Year One. Spoiler: it’s not exactly love at first sight.

Perhaps one of the coolest parts of the “Dark Moon Rising” books, I should mention, is the very subtle way Wagner is building toward Joker’s first appearance through background events, right up until he seamlessly ties his series into the next book on this list (Collects Batman and the Mad Monk #1-6, October 2006 – March 2007). 4) Batman: The Man Who Laughs – The first appearance of the Joker! Well, there have actually been more than one post-Crisis “first appearance” stories for the Joker, but I strongly recommend this one. Firstly, Ed Brubaker (who would go on to write the newsbreaking Death of Captain America) knows how to write a good story. Secondly, this is a straightforward post-Crisis redux of the Joker’s original murder/robbery schemes, with no wacky takes on his pre-Joker days that will be ignored by other writers anyway. Lastly, this book ties in seamlessly with Wagner’s two “Dark Moon Rising” books listed above (Collects Batman: The Man Who Laughs, February 2005; Detective Comics #784-786, September – November 2003).

Alternatively: There have been many “first appearance” Joker stories. Though The Man Who Laughs is more or less the official version, the others can be worth picking up on the merits of their writing. Batman Confidential: Lovers and Madmen is a well-liked enough tale, and Batman Black and White: Volume 2 has its own radical re-imagining of the Joker’s background written by Paul Dini, the man partly responsible for the 90’s Batman animated series. However, the “first appearance” Joker story I see getting the most praise (besides this one) is in Batman: Dark Legends. 5) Batman: Prey – The return of Hugo Strange! Now a media figure on the talk show circuit, Strange wages a PR war against Batman while trying to figure out his secret identity. We also get a better look at Catwoman, as well as the beginning of the Bat-signal.  (Collects Batman: Legends of the Dark Knight, September 1990 – February 1991)

-Note for Continuity Sticklers!: You may be surprised to see Strange has grown a few feet in height since “Dark Moon Rising,” but this is one of those continuity snags I warned you about – Wagner felt the character would be more interesting with an impish stature, and other writers and artists have not agreed with that interpretation. 6) Batman: Four of a Kind – Collecting a series of annuals which told the origins of four of Batman’s greatest enemies. These are all fantastic and fun stories, with the Riddler tale being especially well-done in my opinion.

We’re also afforded cool glimpses at Batman’s very human side as he slowly builds what he needs to be the legendary Dark Knight. For instance: have you ever thought about how Batman had to make the concrete steps down into the Batcave himself?…of course you haven’t, that’d be kind of crazy (Collects Batman: Shadow of the Bat Annual #3, 1995; Detective Comics Annual #8, 1995; Batman Annual #19, 1995; Batman: Legends of the Dark Knight Annual #5, 1995).

–Note for Sticklers!: Some of these stories would seem to take place a little earlier on the timeline, but my own opinion is that this spot in the list is the best place for the collection 7) Batman: Venom – A well-received story written by Batman legend Dennis O’Neil himself which paints the Dark Knight in a very human light. When Batman goes through what he feels is a huge personal failure, he decides he must make himself good enough to guarantee success in his crusade by any means necessary.

This book introduces Venom, the performance-enhancing drug which will juice up Bane years down the road. On a personal note, I would add that this always felt to me to be the spiritual successor of Batman: Year One, in terms of tone and characterizations (Collects Batman: Legends of the Dark Knight #16-20, March – July 1991). 8) Batman: Snow – Snow features Eisner-nominated artist Seth Fisher’s colorful and lightly cartoonish take on the Batman, which is all the more surprising when most Batman tales in this period are 60% people in the shadows getting punched.

We also have the rare sight of conflict between Batman and his lawful allies, Harvey Dent and James Gordon, which leads to Batman’s pre-Robin experiment with in-house help. The third big draw here, though, is the origin story of the tragic Mr. Freeze (Collects Batman: Legends of the Dark Knight #192-196, August – December 2005). 9) Batman: The Ring, the Arrow and the Bat – It’d be more appropriate to title this as a Green Arrow book, since he’s the common element in both halves of the story collected here. But Green Arrow didn’t exactly have an award-winning television show when these were published, so the name on the marquee naturally belongs to the guy with the pointy ears.

The trade opens up with the first meeting between the Green Arrow and the Green Lantern, the genesis of a classic partnership. In the second half, we get Green Arrow joining forces with Batman, which is hilarious and fascinating. Every page seems like a reminder of how inhuman Batman seems to others. And it’s worth mentioning that the book is written by Bronze Age master Dennis O’Neil (Collects Legends of the DC Universe #7-9, August – October 1998; Batman: Legends of the Dark Knight  #127-131, March – July 2000). 10) Batman: Terror – The direct sequel to Doug Moench and Paul Gulacy’s Prey, and Batman’s final dealing in the machinations of early foe Dr. Hugo Strange. In this story, Strange tries to strike at Batman by psychologically rebuilding Scarecrow, whose confidence has been shattered after getting the straw beat out of him in his first encounter with the Dark Knight.

We also see more of Catwoman and get the sense of a budding understanding between her and the Batman. A dark, twisted romp as we begin to close down Batman’s early period (Collects Batman: Legends of the Dark Knight #137-141, January – May 2001). -Note for Sticklers!: The introduction of Barbara Gordon would date the second story in this collection as occurring after Dark Victory, a later work of Loeb and Sale’s (more info below!). However, Batman and Gordon’s attitudes toward “colorful” villains suggests they are still an emerging phenomenon. Furthermore, placing Haunted Knight that late in the timeline would mean its stories occur after Dick Grayson comes to live at Wayne Manor, and the Boy Wonder is totally absent from this collection. Since these stories hinge on Batman’s lonesome introspections, it would pervert their purpose to frame them in a reading order which would present them with the understanding that Robin’s somewhere in the background just being straight-up ignored. 12) Batman: The Long Halloween – This is it, the big series which many of these other trades have been building toward. Batman, Harvey Dent and Captain Gordon team up for a final push against Gotham’s untouchable crime lord, the Roman. But for all Batman’s adventures since he first put on the cape and cowl, is he ready for Gotham’s biggest challenge?

And while the Roman’s organization is pincered by Batman on one side and the mysterious “Holiday” killer on the other, the colorful freaks of Gotham slowly take control. It’s a fantastic, moody, and enthralling direct sequel to Year One by the superstar team of Jeph Loeb and Tim Sale, so good that this book was a big part of the writing process for the film The Dark Knight. A must-buy (Collects Batman: The Long Halloween #1-13, December 1996 – December 1997). 13) Batman: Dark Victory – In this sequel to The Long Halloween, Jeph Loeb and Tim Sale revisit the early Dark Knight one last time. It is essentially the climax of a Year One trilogy which opened with Batman: Year One. The theme of the book is trust, an issue Batman and Commissioner Gordon grapple with in the wake of Harvey Dent’s heel turn. It is, of course, also the first modern age canonical appearance of Dick Grayson, portrayed here as angry and sullen in the wake of his parents’ deaths (Collects Batman: Dark Victory #1-13, December 1999 – December 2000).

A Final Note: If by chance you weren’t born in a stately manor, you may be lacking in the money or time to acquire this complete list. Don’t fret! Here’s a condensed version with only the essentials.
– Batman: Year One
– Batman: The Long Halloween
– Batman: Dark Victory

One thought on “Batman Origins: The New Reader’s Comics Guide”