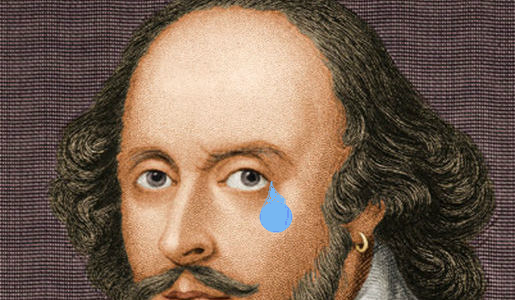 Producers at Lionmount Studio announced today they would be rebooting the centuries-old English classic, Hamlet, including a full-blown rewrite. “We’re always saying as justification for these reboots and such that, you know, Hamlet’s been re-performed and re-interpreted hundreds of times,” explained Harvey Killjoy, a studio big-wig who’d been secretly injected with truth serum shortly before the press release. “We’re always saying, you know, how so many different people have come into these roles. And people buy it! We’re at the point where a story is ‘genuine’ or whatever no matter what you do.”

“So the other day I’m getting baked with Matt McConaughey, who’s devious and funny as hell by the way. He once bet someone $1000 he could become a movie star with a last name no one could even spell. Then he’s all ‘alright, alright, alright’ and some jerk is out a roll. Anyway, he gets this twinkle in his eye and he’s like, I wonder if you could pull this crap off with actual Hamlet?” At this point Killjoy leaned forward and winked conspiratorially. “I said, if we can do five superhero reboots in ten years, two of them the same goddamn guy, we can do one Hamlet.”

When asked whether the writing for The Unstoppable Hamlet: Lamentable, part 1 of a planned trilogy,  would be of the same artistic merit as the original, Killjoy gave a shrug. “Let me just say this: It ain’t exactly gonna be Shakespeare, know what I mean?”

Disclaimer: All “nooz” at GeekMelee.com is parody. Or, you know, “lies.” Whatever.