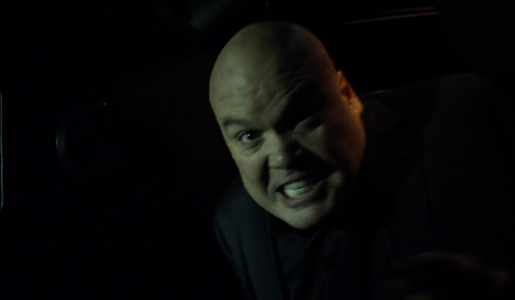 So I guess they still have those totally barbaric, Dostoyevski-ish Siberian prisons lying around in Russia? Whether they do or don’t, it’s great TV, and a great opening for an episode in which we get our first look at one of the mysterious criminal entities from the pilot episode, the Ranskahov brothers. Immediately, a dynamic is established; Anatoly carries a quiet defeatist attitude, while red-blooded Vladimir aggressively pushes them forward. And if Vladimir tearing open a human corpse to rip out the ribs to use as prison shivs doesn’t illustrate a savage will to survive, I don’t know what does.

This opening pairs like a burger and fries with a reminder of Daredevil’s own savagery. While escaping, one of the Ranskahov brothers gets grim clue as to the hero’s favorite 80’s feel-good dance anthem on hood of his car. Our final shot before the opening credits is literally picture-perfect, with Daredevil framed like a…well, like a comic character in a panel. 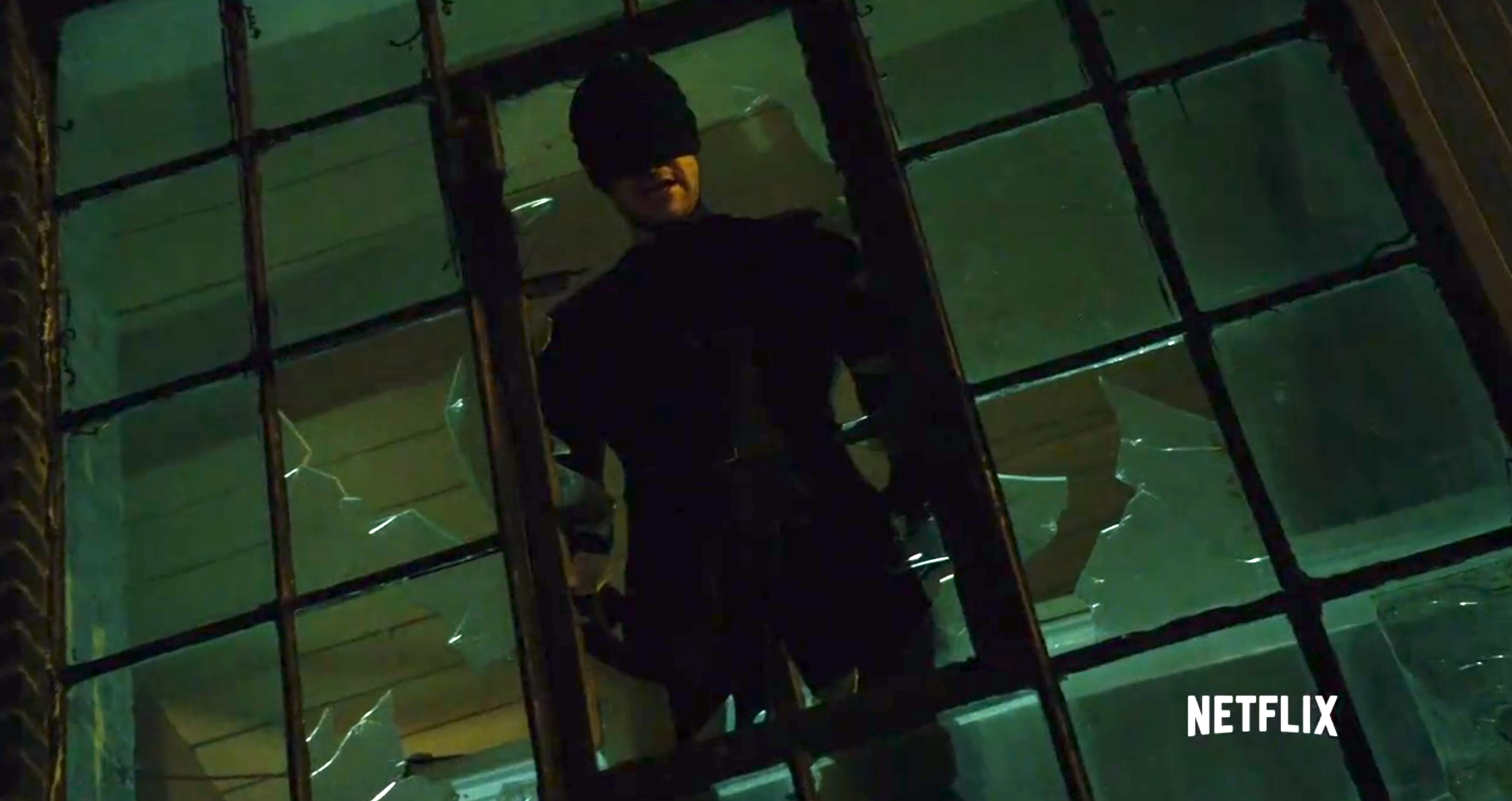 Next we’re treated to a post-beatdown flirt session between Matt and Claire “Rosario Dawson” Templeton, where Matt succinctly reminds the audience that he’s putting the screws to the Russians and now knows Wilson Fisk’s name. Charlie Cox is in great shape, but out of his all-black Daredevil costume he’s almost
shrimpy-looking. Then again, it kind of works. He seems all too human. And I’m really digging slow build of the relationship between Matt and Claire, although I don’t know how you just leave an apartment where living painting Rosario Dawson is flirting with you. The guy is blind, I guess. 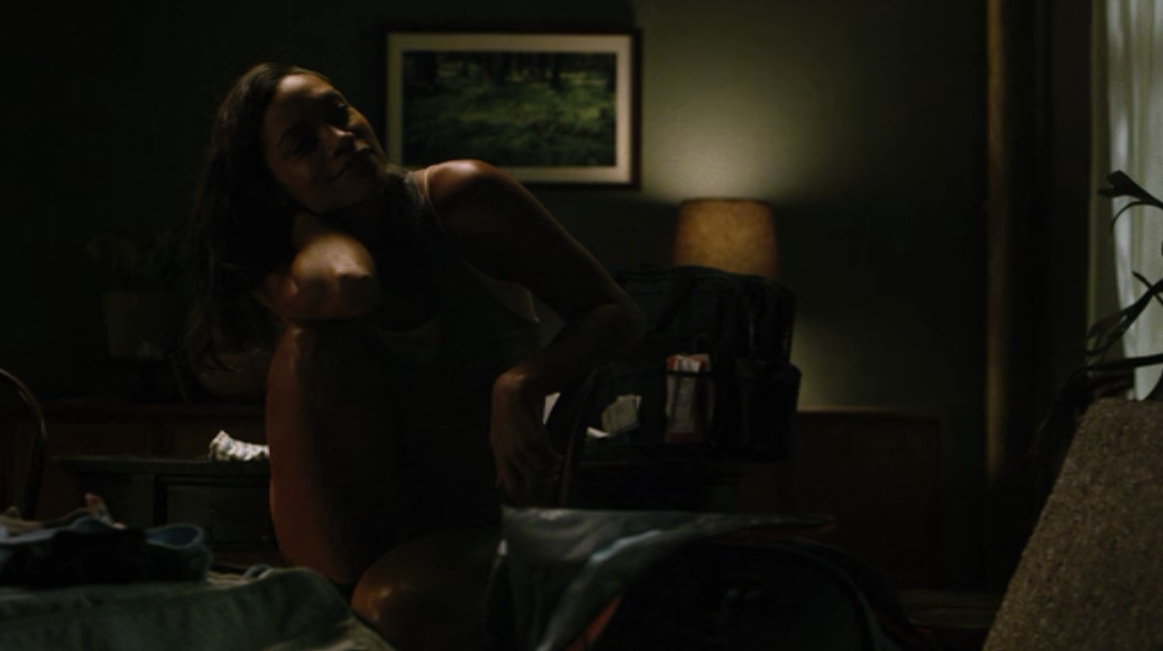 I never knew I could be so attracted to joints.

Meanwhile we find the Ranskahov brothers having words with Wesley at the front for their drug distribution, Veles Taxi (Company slogan: “We are to be getting you where you want to go, if you are catching my meanings”). Wesley extends an offer from the Kingpin help operate the business; Anatoly says they’ll give the offer their consideration, Vladimir tries to melt Wesley’s glasses with pure indignant, Russian anger. The relationship between the brothers set down in the prison thus continues. I can’t help but respect Vlad when he says Fisk doesn’t want people saying his name because they’ll remember he is just a man, because I think he may be on to something.

In fact, this episode really harps on the importance of the secret of Fisk’s name. It’s a fascinating take for a character who maintains a larger-than-life persona in the funnybooks. In comics, Fisk is a respected and well-known businessman. In the reimagined world of Ultimate Spider-Man, he’s even largely suspected to be a crime boss, and yet is so powerful that he has a stranglehold on his own public reputation. 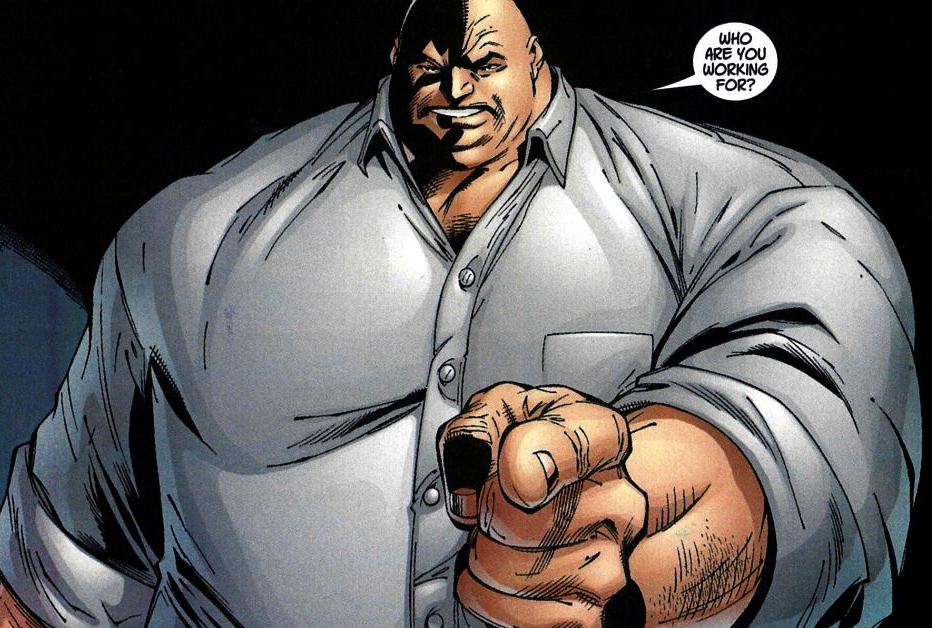 In fairness, who’s going to accuse a guy who looks like he has his shirts made from king-size bedsheets?

We find Karen Page and Ben Urich meeting in a diner scene, which was great for me because I find the gentle clinking sounds in all diner scenes to be oddly soothing. The fruits of their partnership seem to be withering on the vine. “Stories like this are built on sources, Ms. Page,” Ben purrs conspiratorially. “Credible sources. I did some digging into your, uh, past activities.” He probably doesn’t mean Pokemon card tournaments.

Karen’s pursual of the Union story is great. I didn’t expect her to have anything more to do in this series than look irritated while Matt fed her lies about why he was late to client meetings. Now, not only do we have the damsel in distress saving herself from being killed, she is even pursuing the story against the company that attacked her.

The silence weighs on these characters as Karen uses what’s become her trademark move, absorbing humiliation with dignity. Ultimately Urich rejects the story and leaves, not because he’s not convinced she’s right but because he thinks it’s too dangerous. I wondered – what happened to the hungry reporter arguing with his boss for the dignity of the news? 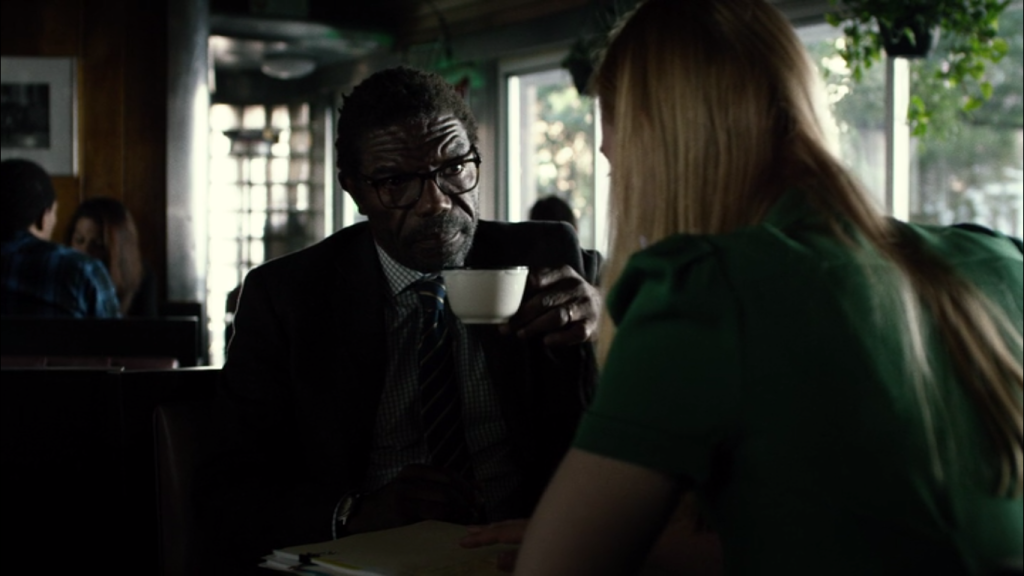 The Ranskahov brothers wake up the man Daredevil and Claire tortured in Episode 2, and wow, isn’t letting that guy live coming back to bite Matt in the spandex. No superhero trope is perhaps more exhausting than the self-aggrandizing resistance to killing, because it keeps causing shit like this. Anyway, prior to waking up their fallen comrade, the Ranskahov brothers continue to amicably argue, with Anatoly insisting on taking Fisk’s offer and Vladimir suggesting they ride through the streets on horseback spraying gunfire into every Big N’ Tall store. Then: “Tell us about the man who did this to you,” the brothers ask. “The devil,” the broken man replies. Nice touch. The next thing we know, a couple Russian goons are staring down that perpetually-dumbfounded looking kid who lives next door to Claire.

Then we also have our first full scene with Fisk. He seems distracted, like a pouty child who’s resigned to doing something he doesn’t want to do. So they drive up to this place and Fisk has to stop Wesley from following him in. Surprisingly, it turns out to be a return to the art gallery where he bought the painting last episode. Although this is a nice surprise, it makes Wesley seem a little…protective. Can’t the guy go talk to a girl without you hanging around? 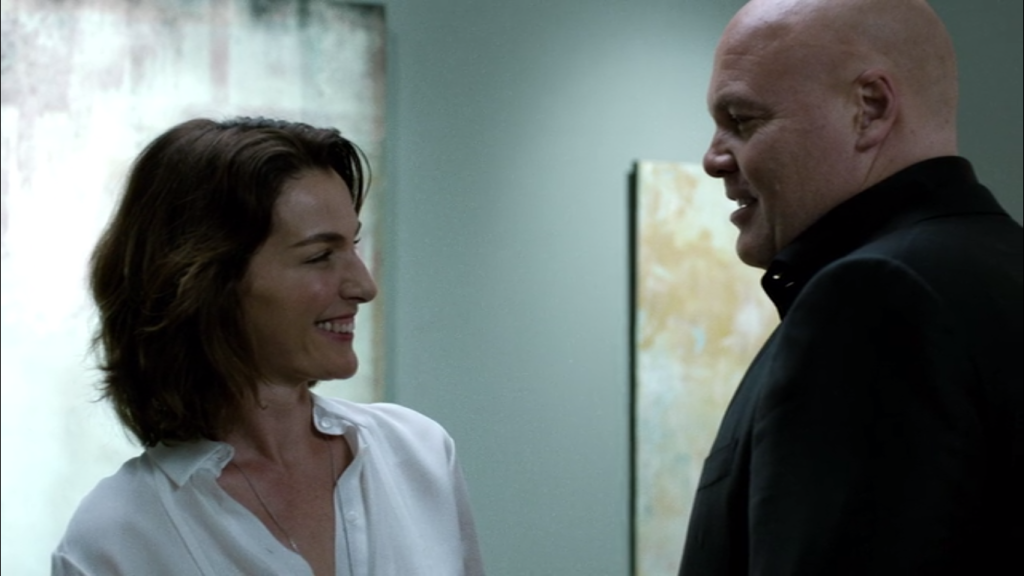 Off-screen: Wesley watches through the window and dabs his eyes with a hankey. “It seems like just yesterday little Wilson was playing Genghis Khan, crushing ants with his little Lego soldiers and threatening to burn their anthill to the ground. Now he’s all grown up and talking to girls.”

Then again, seeing Fisk’s awkward, even sheepish manner while trying to ask the curator out, I’m thinking maybe Mr. Big Tough Crime Lord could have used a wingman. The dialogue between Fisk and Vanessa throughout the episode is not especially snappy. However, Vincent D’Onofrio and Ayalet Zurer manage to create a sense of intellectual attraction between the two that vibrates on the screen. It’s a weird phenomenon, seeing the mighty Kingpin stumble over his words trying to ask out a girl like a high school kid. This is definitely not what I expected of comics’ commanding Kingpin, and I’m trying to keep an open mind.

“My mom wanted me to be a butcher, you know that?” “Oh, not the butcher story.” During a frankly very funny and interesting exchange between Matt and Foggy, Matt gets a literal call for help from Claire and rushes to the rescue. Damn, Charlie Cox can move. Although what was it like for passerby who saw a blind guy pitch his walking stick into the trash and take off down the street?

Matt pitches more than his cane. I was expecting the Superman move with the ripping open of the shirt and the quick back-alley change, but instead Matt tosses all that to the side and burst into the apartment in his lawyer duds. I love that Matt chooses not to waste precious seconds in a telephone booth. He’s a hero who values any degree of human safety in an urgent situation over his secret identity. It totally didn’t help at all here and they drive off with Claire in the trunk of their taxi but still, the sentiment was nice. 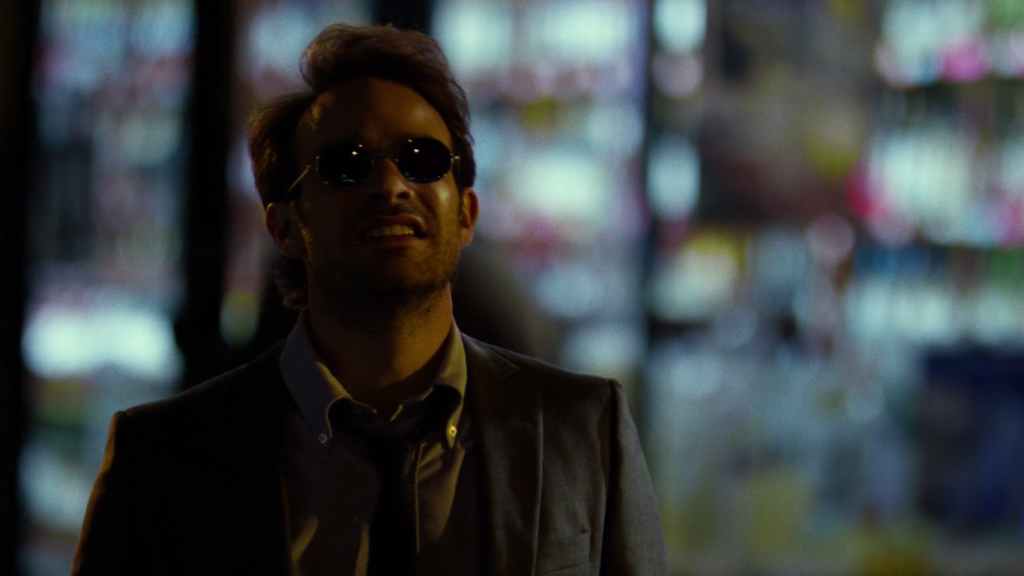 Karen’s investigation, teamed with the intelligent and wise Urich, is becoming a pretty fascinating plotline in its own right. At first, I couldn’t have been less interested in watching Matt’s secretary puttering around, but with the introduction of Urich and a strong element of danger, Karen’s become like the protagonist of an Alfred Hitchcock thriller.

Meanwhile, Claire’s appropriately-distressing abduction is finally about to come to an end. Matt has questioned her dumbfounded neighbor and tracked her to Veles Taxi. When the lights go out, sure, it’s a trick Daredevil swiped right out of Batman’s cave. But it’s still awesome. And watching these monsters, who have kidnapped and tortured a woman, getting terrified and beat up is immensely satisfying.

It strikes me that, despite being another relatively action-light episode like episode 3, I found myself much less bored throughout. Perhaps because there was a constant threat of violence during its events. Unlike with Matt and Foggy’s moral dilemma over a dry court case, the city feels alive, colorful, and dangerous. Even when the scene is slow and quiet, it colors the events in a powerful way.

I also continue to love that women get to be strong in this show while also getting to be human. Claire gets a hit in with the bat with which she was being tortured. However, she breaks down afterward. No easy quip, just the human release of wracking sobs.

After having been saved by Urich from exposing herself to Union’s snoops, Urich reveals he was trying to protect her by pushing her away from the story. Seeing that she’s committed, he sets some ground rules and they form a partnership. He’s a badass. The two become a team in this diner. And it’s great. I’m finally looking forward to more from this storyline. Also how incredibly lucky is Karen that her weird cover purchase at the auction turns out to play into Foggy’s desire for a more professional office space?? It’s almost too sitcom-y to accept, but then Foggy starts to go into that butcher story and all is forgiven. Seriously, I need more Foggy. 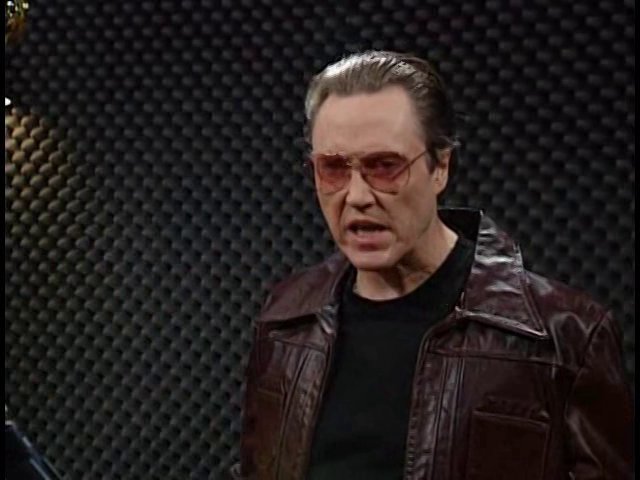 “I gotta have more Foggy!”

This episode of Daredevil concludes with some interesting moves from the Kingpin. Anatoly barges in on his date with Vanessa, at which point we discover that the entire room of people dining was actually Fisk’s bodyguards. Fisk makes a hasty exit with Vanessa, asking Wesley to “put him in a car.”

The final exchange between Vanessa and Fisk is very indicative of their relationship. I don’t want to bring up information from the comcis that might spoil the direction of the show for people who haven’t had much exposure to Daredevil. Suffice to say that Vanessa figures prominently in the Kingpin’s life, and this sort of struggle between her feelings for Fisk and her dislike for the shadiness of his business is a common conflict.

I feel something like fear of Fisk for the first time in the shot where he explodes through the door of the limo, reaching for Anatoly with his huge hands. I’m reminded of Jaws. Finally getting a look at Kingpin’s savage side is not shocking, but it is immensely satisfying. Though I haven’t been convinced that D’Onofrio had the stature to play the gargantuan Kingpin, for the first time here I have an appreciation for his size. We’ve had a gentle giant for nearly two episodes (counting his brief appearance at the end of ep 3), and after fifty minutes of him struggling to talk to a girl, watching Anatoly’s brains leak out of his head as Fisk crushes his skull with a car door is a powerful contrast.

I still don’t know if I am yet down with this interpretation. From his very first moments on the show, Daredevil‘s writers have founded their version of the Kingpin on his vulnerabilities. It’s actually a pretty daring move, one that did not pay off immediately but is slowly building a character in front of me I find
fascinating and scary. I’m not exactly won over yet. None of this is unexpected. But I’m not asking for surprise, exactly, with our Netflixian Fisk, just good execution, and so far Daredevil has delivered that. So without yet being won over, I’m definitely fascinated and hungry for more.

0 thoughts on “Marvel’s Daredevil: Season 1 Episode 4 “In The Blood””