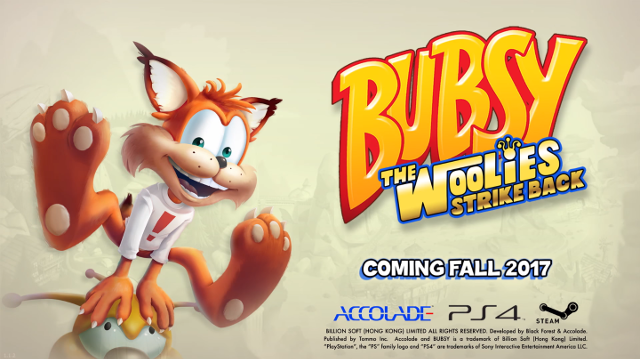 The rest of E3 should be canceled this year.  Shut it down.  Send everyone home.  The entire 720,000 square foot Los Angeles Convention Center, all of the 5,600 parking spaces, the countless hours of press conferences and new game reveals, and the thousands upon thousands of newly allowed non-press attendees walking the floors will ring utterly and completely hollow in the face of the news that came out and shook the gaming world last Thursday.  The biggest video game announcement has already dropped.

Bubsy: The Woolies Strike Back is being released this year.  Honestly, just fucking shut E3 down.  What’s the goddamn point?  The Bubsy franchise, dormant since 1996, is finally back and literally nothing else that happens for the duration of E3 can stack up to this life-altering information.  Kingdom Hearts III trailer?  Who fucking cares, it’ll never get released anyway.  Project Scorpio?  No one gives a good goddamn shit.  Fucking Anthem?  I don’t see any bobcats in this game, it must be garbage.

Bubsy did an interview while wearing this hat.

At press time, everyone was rewatching the perfectly voiced Bubsy: The Woolies Strike Back trailer for the umpteenth time, wishing it was already autumn.  Fans have also begun following Bubsy’s Twitter and Instagram accounts while trying desperately to hire him via his Linkedin profile.