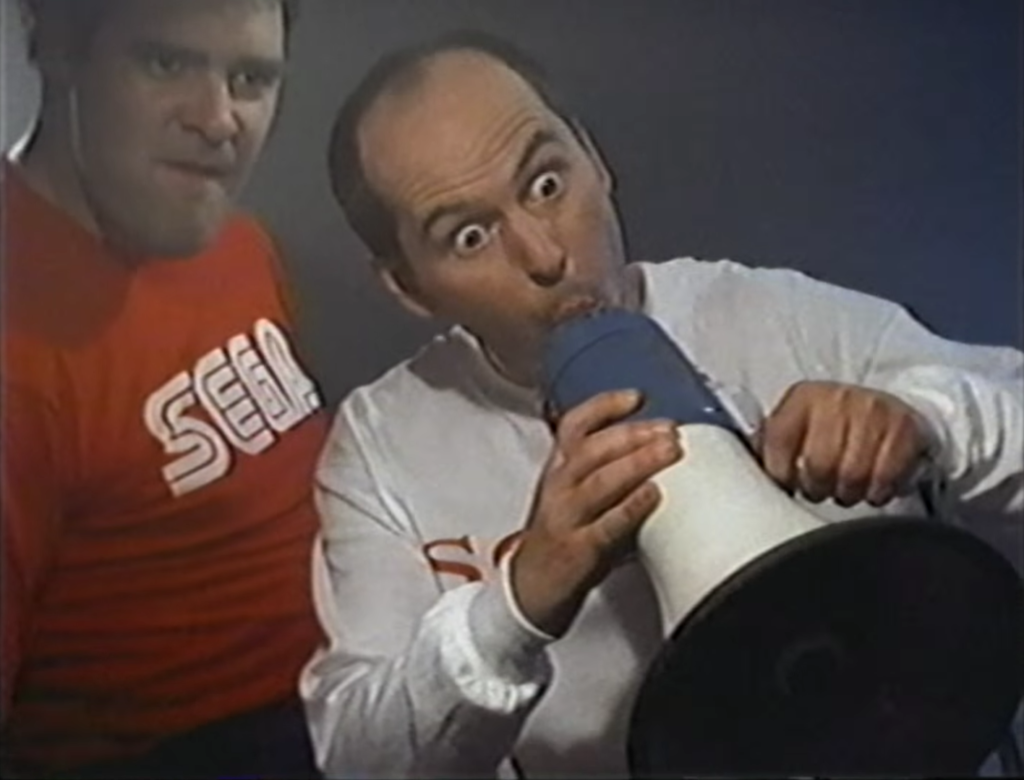 As I covered in a previous article, Nintendo used to send out promotional VHS tapes to Nintendo Power subscribers about upcoming video games.  One of the better ones was for Star Fox 64.  Much like the Pokémon video, I ran this tape through the ringer in terms of how many times I rewound and watched it again.  Be warned: the acting is Oscar caliber here.

When I said Oscar caliber I was not lying.  That was not a joke.  Every line delivered by these actors is so damn perfect, especially everything from the Sony guy.  “Bit Boy” has to be the best insult for someone I have ever heard in my life.  This video is perfect.  Let’s start from the beginning.

First of all, it calls the video a “Feature Presentation”, which is insanely generous and hilarious.  The announcer takes a weirdly long pause between the words “Nintendo” and “Power” and we’re off to an amazing start.  A Nintendo test pilot, I guess, parachutes down in front of a Nintendo building.  A man wearing a Sony shirt and hiding in a van, the best actor in all promotional videos ever made by the way, radios his partner sporting a Sega shirt that the “eagle has landed.”  The Sega man is seen dousing a cloth with some kind of liquid.  Sony stumbles from the van, which is also labeled as “Diaper Service”, and asks Nintendo Pilot for the time.  He does so through a megaphone because of course he does.  While distracted, Sega emerges from the bushes and chloroforms him.  They then both laugh maniacally in broad daylight in front of the Nintendo building.

We cut to a warehouse with Nintendo Pilot tied up.  The following exchange then happens:

Nintendo Pilot: What’s this about?

Sony: (into a megaphone, still) Quiet Bit-Boy.  We’ll ask the questions around here.

Nintendo Pilot: Do you uh, have to talk into that thing?

Sega: Word on the street is you got a new Nintendo 64 game coming out.

Nintendo Pilot: Could you be a little more specific?  We got a ‘lotta new games coming out.

It was at this point that I laughed very loudly.  One, because what great writing.  But two, Nintendo has not been able to say “we gotta ‘lotta new games coming out” in a very, very long time.  It was a sad laugh.  Sony and Sega have heard that Star Fox 64 is on its way and they want to know everything about the upcoming game.  Nintendo Pilot balks of course, but Sony and Sega are prepared.  They unveil a Mario doll who has his entire head in a vice. 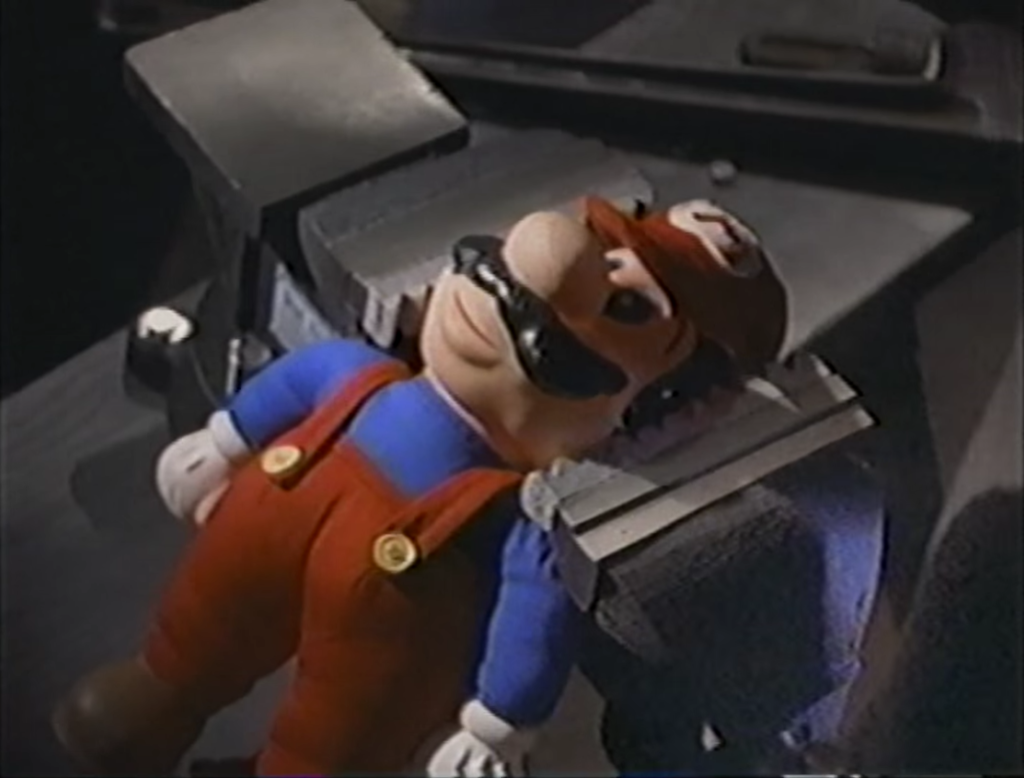 Sega tightens the grip until Nintendo Pilot just can’t take it anymore.  He spills his guts about the new game.  Footage is shown to the audience, but it appears as though all three of them are seeing it…somewhere?  It doesn’t matter because everything being shown is peppered with badass rock music and fuckin’ sick explanations.  He gives the Blue Marine far too much credit for the one mission it has in the game.  He also discusses the voice acting, which is some of the most memorable in gaming history.

Sony and Sega are in shambles.  They know the new game is going to be phenomenal.  Nintendo Pilot laughs, revealing that there is still so much more, but “Bob would kill me if I told you.”

Bob would kill me if I told you.

Next comes quite possibly the best scene in the video.  Sony and Sega find Bob immediately and it’s unexplained how they did it.  He is wearing a lab coat and writing shit on a clipboard in some science looking place.  It’s glorious.  Sony and Sega are dressed as pizza delivery men, because you definitely need two people to deliver a small box. 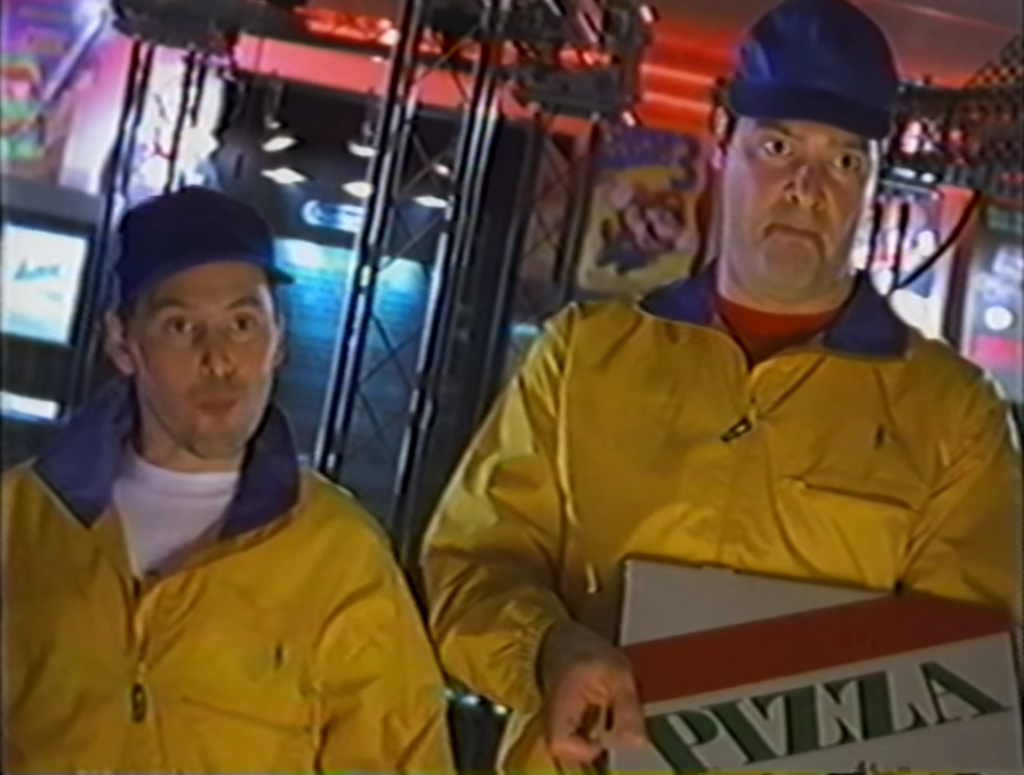 Found my next Halloween costume.

Sega then opens the pizza box and a very pink gas emerges, knocking Bob out.  They both laugh as evilly as possible and I laugh so hard every time I see it.  What happened to this Nintendo?  So Bob is now tied up and disoriented.  He accidentally reveals the existence of…THE RUMBLE PAK.  He initially won’t say anymore, but Sony and Sega are prepared with yet another torture device.  First, they use the “Bit-Boy” insult again, and it’s even better the second time.  Then they show that Mario is connected to a goddamn battery and electrocuted for several seconds at presumably a high voltage.

Again, Nintendo made this in 1997.  Bob obviously relents because he loves Mario and unsheathes the Rumble Pak in all its glory.  He explains that it’s the “big reason why Star Fox 64 is the coolest cinematic gaming experience there is.”  He almost stumbles on “coolest” and adds about three extra Os and it’s just magnificent.  Sony and Sega don’t believe him.  Luckily, there is a Nintendo 64 AND the game, with four controllers, sitting in the dingy warehouse or wherever they are.  TIME FOR  GAME FOOTAGE. 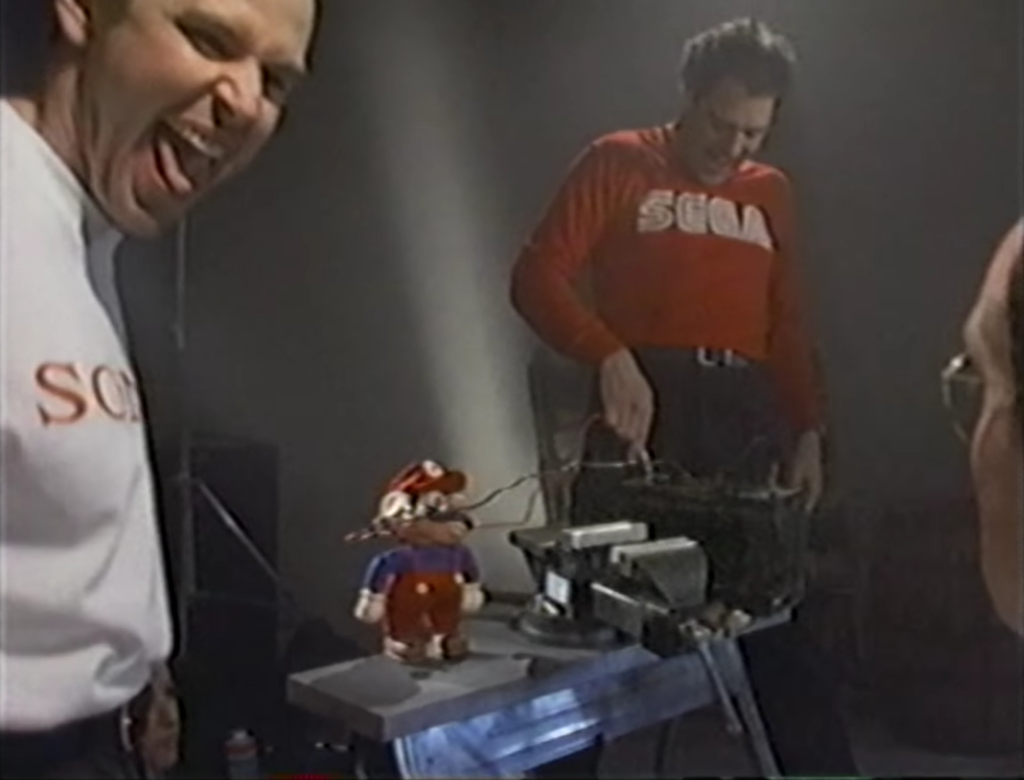 Sony is enjoying this so goddamn much.

Bob explains how the Rumble Pak works.  Every time a vibration occurs, the entire screen shakes to better give the viewers at home an idea of how it works.  “WHOA.  I actually felt it,”  says Sony.  They then play versus mode, but not before a “let’s get ready to rumble” joke is made because OF COURSE THAT JOKE WAS MADE IT WAS 1997 AND IT’S CALLED THE RUMBLE PAK.

Sony and Sega make fun of their own systems by asking if the game can be played on anything else.  “NOPE!  Only on Nintendo 64!”  Bob and Peter, Nintendo Pilot guy’s real name, respond.  Bob then says they have even MORE games coming out, flooring Sony and Sega further.  A sizzle reel follows, again coming from the TV they were just playing Star Fox 64 on, and oh my God.  Oh.  My.  God.  I must have rewatched that part hundreds of times.  Goldeneye.  Yoshi’s Story (titled as Yoshi 64), and Mischief Makers were just a few of the games that got me PUMPED AS HELL.

However, it was the last game on the list that took home the gold.  Showing a paltry four clips and coming in just under four seconds in length, the then tentatively titled Zelda 64 absolutely blows everything else away.  Link is shown jumping, running a little bit, opening a chest, and turning around to pull out his sword as a gate closes behind him.  In four seconds.  That’s it.  In reality, it’s fucking terrible.  But as a ten year old boy?  I could not watch it enough times. 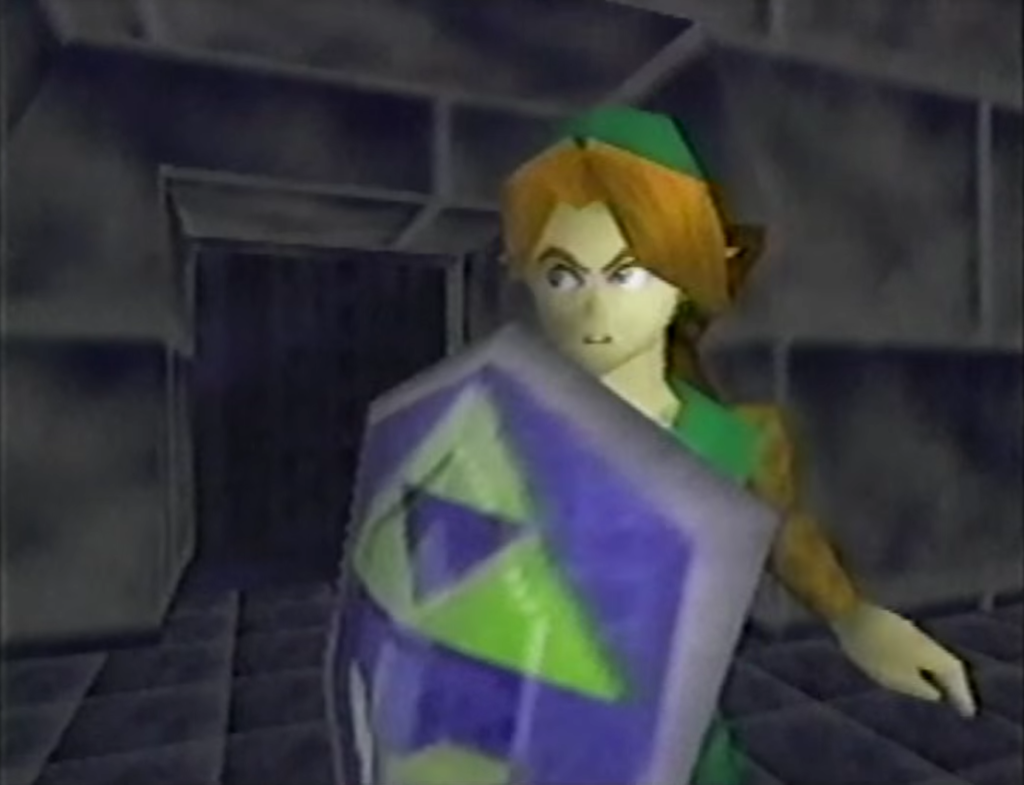 Bob and Peter/Nintendo Pilot decide they can’t play games anymore and have to go do whatever it is they do all day.  Look at clipboards?  They offer up the Star Fox 64 official player’s guide, but then tell them “you can buy it at the store” like total assholes.  Peter/Nintendo Pilot, yelling into the megaphone now, tells them to visit starfox64.com for more gaming information.  You’ll be disappointed to know the website now leads to a Twitch channel owned by KiddFlux.  I don’t know how this happened.  They sarcastically thank them for the pizza, call them “guys” and “boys” in the worst tone possible, and then just straight up laugh in their faces while the best music closes out the video.

I don’t even care that none of it makes sense.  It’s so damn fun.  The acting is amazing, the dialog and delivery is spot on, and everything about it is a joy to partake in.  Nintendo knew how to market at one point in time and this is proof.  I feel like I should wrap up my VHS tape and send it back to them, with a sticky note attached that just reads, “Remember?” 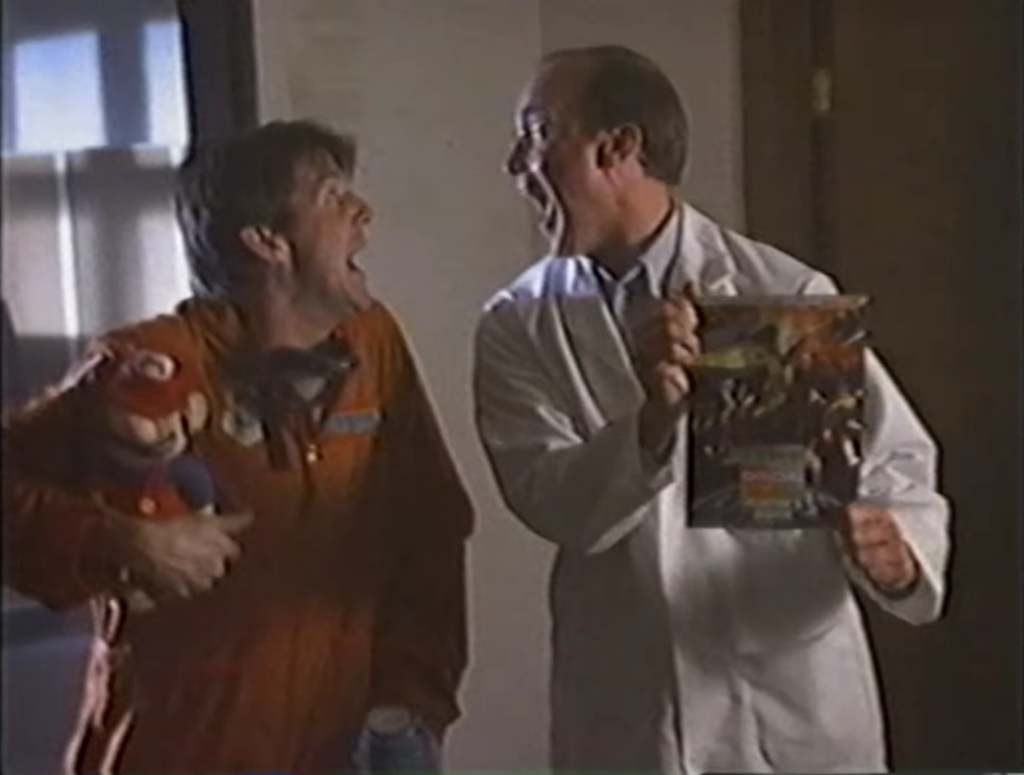 Find someone who looks at you the way Peter looks at Bob.