Carrie Fisher: Not Our Madonna, But Our Friend 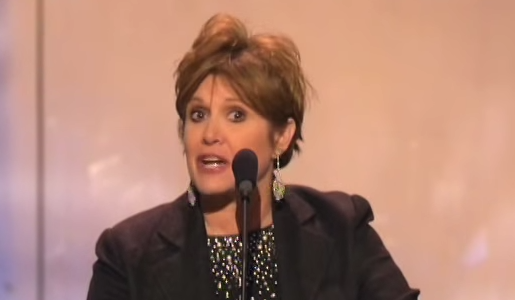 By now, you’ve probably heard the news that’s rocked the geekosphere, but just in case: Carrie Fisher, of Princess Leia fame, is dead at 60.

Never as a kid watching The Empire Strikes Back in the family living room did I think for a moment what it would be like when the actors playing these characters died. But even less did I think of the media circus that would ensue when one of them did, as professional blog writers fell over each other to say how important to our lives they were and claim them for this or that political or social justice movement. It’s weird.

I’ve seen a lot of articles touting what a feminist icon she was, and honestly, I think it’s kind of bullshit. Carrie Fisher will never appear on anyone’s list of great writers. Her movie output, while consistent, contains actually very little to sing home about. I don’t want to knock anyone else’s sincere feeling about her and what she means to them, but I have a hard time believing this initial wave of Madonna imagery really represents her. At least, it doesn’t to me. I think because everyone likes Fisher, and because she’s such a recognizable touchstone in the geek media world, there’s been a rush to canonize her.

What was great about Fisher, and what I think a lot of people discovered about her during the press junket for Force Awakens, is that she was just a very regular person. An odd regular person, surely, but regular. The most admirable thing about Fisher was that she never pretended to be anything more than human, even when surrounded by media that would have gladly accepted a glossier version of her. Instead, she reminded that media that she was a regular person, thrust by birth and then circumstance into increasingly abnormal circumstances.  She handled them as best she could, and made herself and us laugh while doing it. She turned personal crises into something meaningful. It’s some remarkable stuff. It’s normal person remarkable stuff, but that doesn’t disqualify it from being remarkable. And we shouldn’t need to turn her into anything else to be remarkable.

Here are some things that I personally like about Carrie Fisher and that she’s given me. I own her book, Wishful Drinking, and it’s a colorful and weird testament to her character. She has an important supporting role in one of my favorite movies, When Harry Met Sally, and I wouldn’t have anyone else in that role. I really, really like her interview for Good Morning America. Imagine anyone else saying these things to their interviewer, how mean it would come off, but Fisher is just so without malice. I also like her bit at George Lucas’ ceremony for his Lifetime Achievement Award from the American Film Institute.

As a kid, I wanted to be best friends with Mark Hamill. As a teenager, I hoped Harrison Ford would think I was cool. As an adult, all I want is a beer with Carrie Fisher.