Shin Godzilla Review: The New, The True, The God 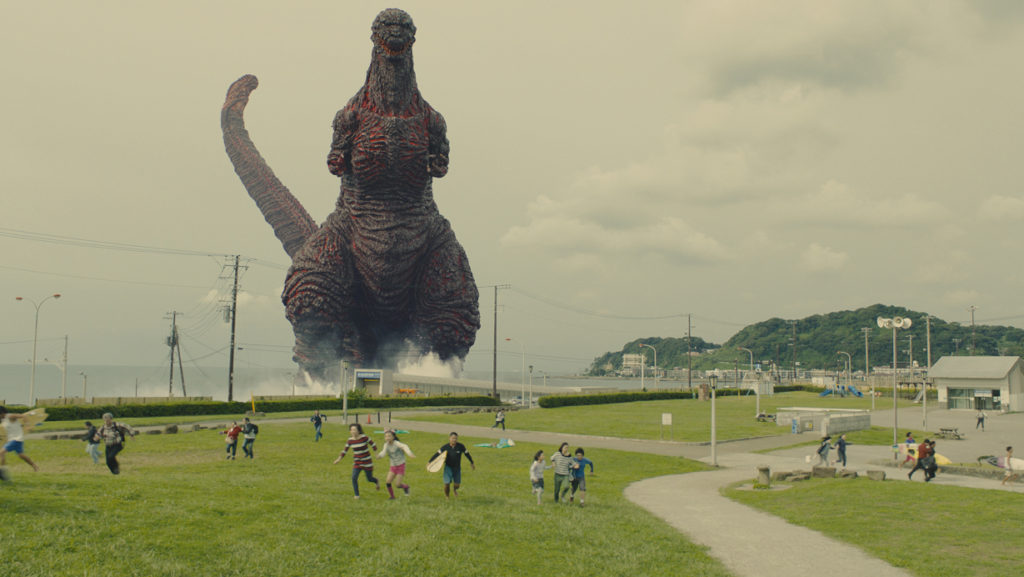 Shin Godzilla is quite possibly the best title for the film reboot about a giant creature wreaking havoc across Japan.  “Shin” can convey several meanings, including “new”, “true”, and “god”, all of which are fitting for the latest entry in the long running kaiiju franchise.  Admittedly, I have only seen the American Godzilla from 2014 and pieces from an assortment of the original ’50s and ’60s films.  I am no expert, but I absolutely loved this take at the age-old monster.  Plus, I certainly never saw or claimed to have enjoyed the Roland Emmerich Godzilla from 1998.  Yikes.

Being a reboot, no one has seen or heard of Godzilla in this world.  He makes his first appearance here, and Japan must respond accordingly.  The first twenty-five minutes almost play as a pseudo-political parody, juxtaposing the destruction being caused with all the red tape and bureaucracy of the government, having meeting after meeting, but not acting in a remotely timely fashion.  It’s genuinely funny, but boy does it move fast.  The number of characters introduced, very little of which have more than a few seconds of screen time, is astronomical.  They are all given names and titles on screen, but I didn’t have a spare moment to read them because they were speaking at the same time.  It didn’t matter; that was almost the point.  There are so many department heads and every last one of them has an opinion to lob at the Prime Minister, a man who isn’t ready for the impending catastrophe and does his best with all the burdens that are laid at his feet.

We focus in on about three to five other characters, but a lot of their story gets lost in the exorbitant amount of talking.  It’s a lot of reading, and at certain points, particularly in the middle, it drags a little.  Never to a stopping point, but it became noticeable in places that I was reading a lot of words.  There’s also an American subplot and a surprising amount of English spoken.  The Americans are not painted in the best light, but Godzilla films often focus on nuclear hostility, so it’s not too surprising.  There are some powerful moments involving these themes, as well as striking imagery that calls back to the 2011 Fukushima Daiichi nuclear disaster and the Tōhoku earthquake and tsunami.

The cinematography also deserves a lot of praise.  It’s working overtime to make people talking in rooms, a huge amount of this film, engaging.  It moves and cuts quickly and erratically and, coupled with the speed at which every actor speaks, makes simple dialogue into action scenes, slamming back and forth between politicians as they desperately try and figure out a way to stop Godzilla from causing more damage.  The score helps tremendously here, especially during deliberation scenes and, of course, the attack and aftermath.  The directors, Hideaki Anno and Shinji Higuchi, are both known for their work on the anime Neon Genesis Evangelion, and that style shines through here.  They even reused and remixed a song from the show, “Decisive Battle”, in several scenes.  Here’s the original for comparison.  It made passing out papers and discussion plans cool.

“Is this…is this on?  I…goddamnit I have no idea how to work this.”

It’s far more a film about the human spirit, banding together as a country to overcome the odds, than it is about a giant creature destroying everything.  Godzilla makes up, at best, 20% of the overall film.  But make no mistake, it’s worth the wait.  Every second of it is as glorious as it is heartbreaking to watch.  The CGI is incredible, adding motion capture into the mix to portray a very lifelike enemy.  Its movements are terrifying and spectacular to see in action, and the look of the creature is downright scary.  It’s by far the best part of the film, and seeing the Japan Self-Defense Forces try to take Godzilla down is exhilarating to watch, thanks in no small part to the outside-the-box camerawork that always keeps you on your toes.  There are so many angles that no American film would ever have, and it’s a thrill to see them play out on screen.

It’s not perfect by any means.  It’s wordy as hell and probably could have done with some trimming, but the score, cinematography, and dominant themes more than make up for that.  Plus, all the waiting is as important as Godzilla actually showing up.  Just watch the trailer to get a taste of everything I’ve mentioned.  The American run of the film has apparently done rather well considering the limited nature of it so I’m excited to hopefully see more of these down the line.  It’s a solid kaiiju film and one that deserves your attention.  The new, the true, the god.

2 thoughts on “Shin Godzilla Review: The New, The True, The God”