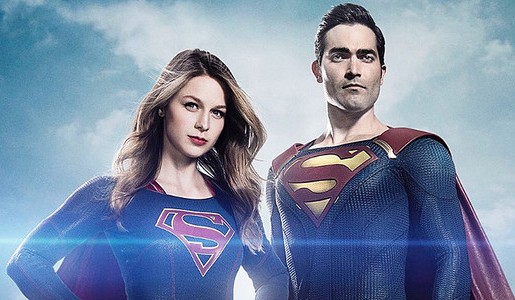 When Superman was announced to be showing up on his cousin’s show Supergirl, I was a little disappointed. Ironic, considering that my biggest issue with the 1984 Helen Slater Supergirl movie is the big hole where Christopher Reeves should be. But buoyed by the perfect casting of Melissa Benoist, this show has really carved out the right to exist on its heroine’s own merits and didn’t need the Man of Steel to step all over Supergirl’s cape. Which is why, on fucking principle, I am talking about Benoist first.

And obviously she is great. Benoist just glows in this role, lighting up every scene she’s in while keeping Kara Danvers a grounded and real person. I don’t know whether to crush on Kara or aspire to be more like her, but I’m usually leaning toward the latter. The CW’s ads for the show describe their Supergirl as “a hero for everyone,” and Benoist delivers. It’s crazy how often I can utterly relate to this bulletproof extraterrestrial.

Obviously some credit for that belongs to her co-stars. No one more so than Chyler Leigh, who, besides absolutely rocking that Emma Peel catsuit look, rises above for being apparently the only adult on the show. Even Hank Henshaw, played by grown-ass man David Harewood, comes across somewhat childish in this episode what with his squabble with Superman…although, it was easy to see why he would be frustrated.

Seriously, Superman doesn’t see the need for the Earth to have Kryptonite? Isn’t that sort of like if I were upset the army has guns? What if Superman were to be mind-controlled – like he was, I don’t know, just last season? Also, a small army of Kryptonians tried to enslave and then eradicate the human race. There’s also that. But yeah, that big mean DEO is being just so unreasonable holding onto some Kryptonite. Just being mean.

Mehcad Brooks and Jeremy Jordan return as “James” Olsen and Winn Schott, respectively, but who cares.

Kidding! Brooks continues to deliver a character who, despite having absolutely no trace of the Jimmy Olsen from the comics, is otherwise a solid and interesting persona. He reminds me of people I know in real life, and really, what more can you ask of an actor? But wtf with Kara just dropping their whole romance after half a date. Seriously, so many tears over this subplot last season, and the very moment she’s got him she loses interest. I don’t know why the writers decided to so artlessly kill their romance right away, but it makes her look incredibly flaky.

Meanwhile, Jordan’s Schott continues to rankle me. As the avatar of geek fanboys like myself, he manages to play to the laziest nyyerrrd stereotypes while simultaneously sporting biceps as big as my head. The effect is uncomfortably close to mockery, as if the guy who used to bully you in high school is making a career of his mocking impersonation of you on TV. Is it too much to ask that, like Emily Bett Rickards’ Felicity Smoak in Arrow, our resident IT plot wizard have a little color and energy thrown into him?

There’s also Calista Flockhart as Cat Grant, but we’ll save the best for last. I know you’re probably wondering about that other new cast member. Who was he…oh yeah, Superman. We should talk about him some.

There’s actually been ten live action actors to play Superman already. This time out it’s Tom Hanks’ son in Road to Perdition, Tyler Hoechlin, and if you can picture who I’m talking about you are probably too old to be watching this series…What did you say?…Can I picture that little kid? Uhh, that’s beside the point. I’m young at heart, let’s move on, okay??

Anyway, my rating of this guy’s Superman: he’s fine. I thought he was charming but, in a turnaround from my criticisms of Henry Cavill’s Grimm McFrownybrow version, a little too cutesy for this “veteran” iteration of the character. Like Brandon Routh in Superman Returns, he’s supposedly an older and more experienced Superman who nevertheless looks like a college sophomore going to school on a basketball scholarship. Even with that throwaway explanation about Kryptonians aging slowly, Hoechlin is just so earnest that he never really sells me on the supposed 12 years of experience he has on Benoist’s rookie heroine. 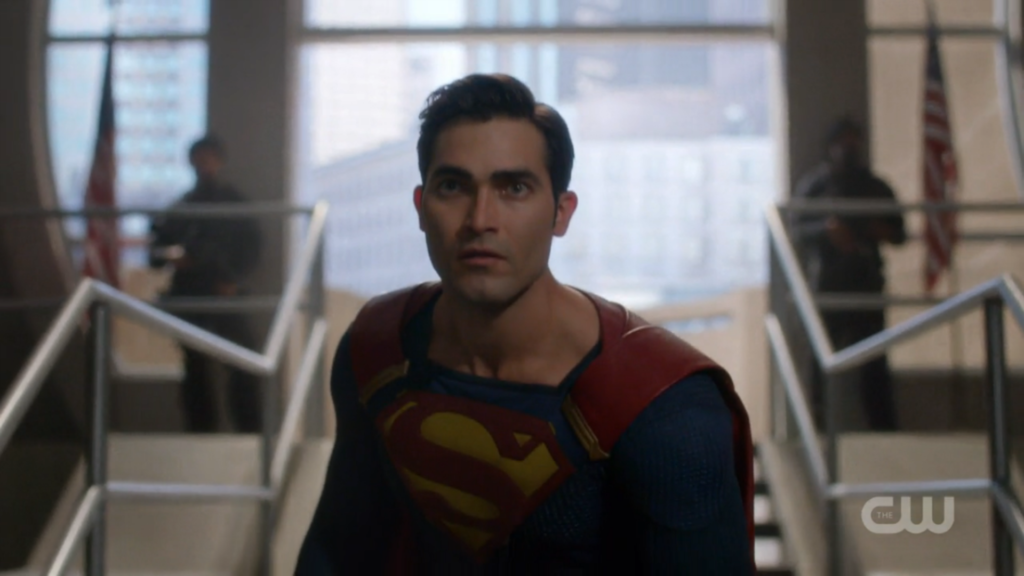 Nothing is actually *happening* here, by the way. This wide-eyed stare is just how he is when he enters the room.

But that’s not to say there isn’t plenty to like. The dude has charm, and plenty of chemistry with Benoist. The two click in every scene, and every smile between them seems to telegraph their history. Also, it is too great when the two of them, fresh from saving a space shuttle (classic Superman rescue scenario, btw), run into a small family and Supergirl blurts out “I used to change his diapers!”

Anyway, enough about Superman. Here’s the plot synopsis: the Girl of Steel teams up with her cousin to investigate Lena Luthor, the sister of Lex Luthor and…Jesus, how many Luthor clones is this show going to put out? First Maxwell Lord, now this. I know they’re from the comics, but still. But this is a good Luthor, so at least there’s that much of a twist, out to clean her bro’s stink off the family name. Slowly, the Supercousins uncover a murder plot and work together through a few larger-than-life crises big enough to warrant two Kryptonians in tights.

You may be thinking to yourself, wait a minute: what about that cliffhanger at the end of the first season with the Kryptonian pod? As a matter of fact, it turns out that pod contained, wait for it: disappointment! Two, in fact. First, instead of a Supercat or Supermonkey (was Comet the Superhorse so much to ask??), we got just a regular-looking dude. Just, the most regular looking dude you can possibly imagine, and that is kind of a letdown. But no more than when the episode just drops this plotline completely halfway through to focus on the Lena plot. Honestly, I didn’t know whether to be irritated they were putting this thing on the backburner, or relieved we were moving on to more interesting things. Seriously though, CW: where’s Comet? 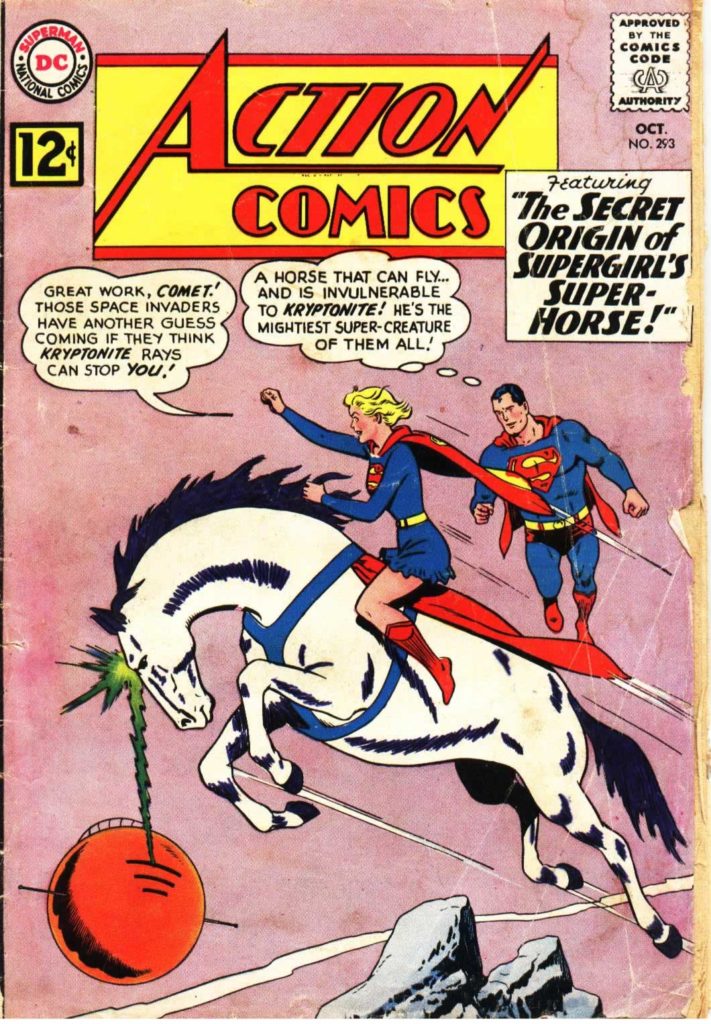 JUST GIVE US SUPERHORSE, YOU BASTARDS!

Oh hey, also: Calista Flockhart continues to shine as Cat Grant. Maybe I’m showing my age when I say this, but I find the older characters on DC’s current bout of TV to be some of the most well-rounded and fascianting. Paul Blackthorne’s Detective Quentin Lance in Arrow, Victor Garber’s Professor Martin Stein in Legends of Tomorrow, and John Wesley Shipp’s Henry Allen in The Flash are all some of my favorite characters, so it’s no surprise that Flockhart’s sharp-tongued media mistress made that list. She’s the mentor we all wish we had: brutally honest, admirable, and funny. Also, kudos to the show for the callback to the Donner films with Grant’s new assistant.

Bottom line, is it good? Yes. It’s the same cheesy mayhem and sparkly-eyed wonder we’ve come to expect from DC’s TV series in general and Supergirl in particular. Saving the world with a smile – thank Rao for this show.