Film records were shattered in 2015. Well, financially speaking anyway. Several films that came out last year are in the top ten highest grossing films of all time. They include: 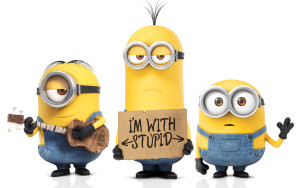 Yes , this has made more money than every other film in history – excluding 9.

Five of the top ten highest grossing films are from 2015. That could be due to a number of different factors – inflation, the economy, 3D/IMAX ticket prices – but it’s still an impressive milestone. It’s a mixed bag for me emotionally. As an aspiring filmmaker and lover of cinema – I’m happy to see the film industry thrive and it’s always heartwarming to see the theater seats full. And yet when I look at the films that are making all the money, I can’t help but feel a bit disappointed.

Out of the 10 films listed – only Inside Out and The Martian aren’t sequels, reboots, or spin-offs of pre-existing material. And The Martian is an adaptation of a book, leaving Inside Out as the only fully original film on the list.

Of course, originality doesn’t constitute greatness, and being an adaptation doesn’t preclude it. My personal favorite films of 2015 include sequels and adaptions. And on the financial side of things, none of what I’m pointing out is news – franchises and sequels have dominated the box office for decades. Complaining about this trend isn’t anything new either, so I won’t even go there. I don’t intend to make sweeping statements on the death of original cinema or the over-reliance on sequels; I bring it up simply to give some context to 2015.

Amid these money-making franchise machines, there were several excellent and exciting new films. Although most of the big money-making films of 2015 were uninspired and disappointing, there were still plenty of good movies worth checking out. Below are my top ten films of 2015 with spoiler free descriptions. I tried to pick some evocative still images from each film to give you a sense of the mood and content of the film – a picture is worth 1000 words after all. I hope you’ll take a moment to read through and if there is anything here you haven’t seen yet – I would highly recommend you rent a copy! If you can, spend a little cash to support these films – especially the lesser known ones. The more support original films can get, the better our chances of avoiding the sequel/reboot doomsday. Drop your thoughts or your own personal favorites in the comments –  I’d love to hear your own top ten.

So straight out of the gate I’m cheating. Wild Tales or Relatos salvajes is a Argentine-Spanish black comedy that was released in Argentina in August of 2014. It had a limited release in the U.S. on February 20th 2015 – and since I never had a chance to see it until 2015 (and it was so damn good) I had to include it here. I would put this higher but since I’m already bending the rules – we’ll leave it at number 10. It’s an anthology film comprised of six standalone shorts united by a common theme of violence and vengeance. “Wild” is the perfect descriptor – some stories are tragic, some bleakly hilarious, but all of them are engaging, unpredictable and the good kind of crazy.

Based on the crazy true story of a social experiment gone too-far, The Stanford Prison Experiment is a must-watch for anyone interested in sociology or psychology. The film is an accurate yet dramatic portrayal of the now infamous psychological experiment that took place in August 1971 at Stanford University. If you know nothing of what happened – all the better. The film is edited like a chilly thriller and will keep you on the edge of your seat. If you are familiar with the results – watch it anyway. It’s a dramatic, thrilling, and curious look at one of the most fascinating psychology experiments in history. 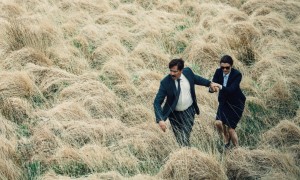 Set in a dystopian near future, single people, according to the laws of The City, are taken to The Hotel, where they are obliged to find a romantic partner in forty-five days or are transformed into animals and shunned. The Lobster is a surprisingly tender love story with a darkly comedic undertone and a brilliant and timely allegory at it’s core. Colin Farrell gives a restrained comedic performance as one of the singles forced into searching for romance and it’s scenic Ireland locations make it a visual feast. The main draw is it’s strange and singular story – elegant, enigmatic, and eccentric – The Lobster is recommended for anyone with a little patience and an interest in unconventional story telling. 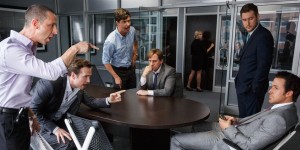 Despite having an all-star cast including Christian Bale, Steve Carell, Ryan Gosling and Brad Pitt, The Big Short actually being good came as a shock to me. I had my doubts as it’s directed by Adam McKay – whose credits include Anchorman, Talladega Nights, and The Other Guys. Not necessarily bad films, but not the kind of director you expect to be co-writing and directing Oscar nominated films. On top of that the subject matter – the housing market crisis of 2007- sounded about as exciting as… well the housing market crisis of 2007. However, it turned out to be the one of the most fun and funny films of the year. The razor-sharp script is filled with witty banter, visual gags, and fourth-wall breaking snark. Meanwhile, the super-fast and creative editing keep the film’s pace relentlessly engaging and kinetic. 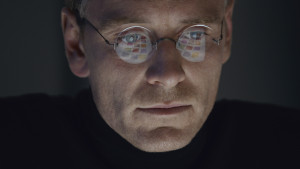 In my mind Steve Jobs is The Social Network‘s less ambitious cousin. Both films were penned by the loquacious Aaron Sorkin and have an excellent script filled with rich dialogue that is a joy to listen to. Sorkin’s words lend a rhythm and energy to the story and transform potentially dull tech-talking into battles of ego, clashes of personalities, and struggles of identity. I knew next to nothing about the real life Steve Jobs before going into the film and I don’t think that matters. You can enjoy this film with no knowledge of tech companies or Steve Jobs. It’s not a standard biography in any sense. The film focuses on three key product launches in Jobs’ career and explores his personal and professional life in a behind-the-scenes style that carries a theatrical sense of intimacy and urgency. While it doesn’t reach the heights of the masterful Social Network, Steve Jobs is still an intelligent film that examines a complex man in an elegant and captivating way. 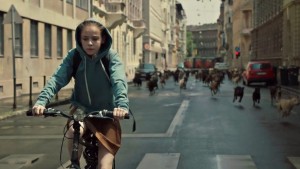 This one is going to be a hard sell, but I loved this film and hope some of you give it a try. Let me get this out of the way – White God is a Hungarian film with very little dialogue whose main characters are a moody 13 year old girl and her mixed-breed dog Hagen. I know, stay with me. It is a highly allegorical film about a dog uprising that could be symbolic for a number of political, social, or racial issues that exist in our world. Yes a dog uprising – that is played completely serious. Is anyone still reading this? If yes – let me also mention that the film is a brilliant combination of tense suspense, outright horror, and heartbreaking drama. It has the best animal acting I’ve ever seen (no, I’m not joking), great cinematography that involves over 200 trained shelter dogs (no CGI or greenscreen), and a simple but powerful story charged with political and symbolic weight. If you are at all interested by the photo or my description, it is streaming on Netflix right now – check it out! 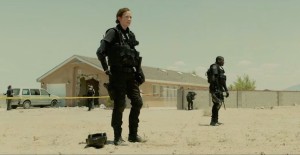 From the director of Prisoners, Denis Villeneuve, comes this action-thriller about the murky morality of the FBI combating the Mexican drug cartel. Emily Blunt stars as a principled FBI agent who (after a tense opening raid scene) is recruited by CIA operatives for a special border crossing assassination mission. Benico Del Toro co-stars as a CIA asset bringing a quiet intensity and ruthlessness to the film that is magnetic and one of my favorite performances of the year. The film is a sweaty-palm thrill ride with tense and chaotic action scenes propelled forward by a pulsing drum-driven score and a dirty, grim visual atmosphere. Beneath the sleek and thrilling story, there is a deeper, darker examination of the war on drugs, the gray morality of international policing, and the inevitable circle of violence. 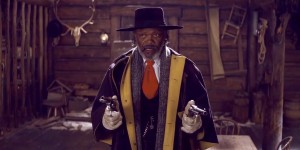 A lot can be (and already has been) said about Quentin Tarantino’s 8th film The Hateful Eight. His film releases are almost always met with controversy and polarizing opinions. Tarantino’s unique blend of humor, blood and gore, linguistic wandering, and narrative playfulness are not for everyone – but I’d count myself among his loyal fans. My bias known, I will admit I don’t think this one reached the heights of Django or Basterds (my personal favorites). Despite that, it’s still a terrific film. The Hateful Eight is a combination of genres: an intimate western murder mystery presented like a theatrical whodunnit that maintains a delicate balancing act between bloody cynicism and playful comedy. The glorious ensemble cast works their charms with a fun and engaging script filled with the typical Tarantino wordiness. It may be a tad overlong, but if you are a Tarantino fan you know what you are seeking, and The Hateful Eight delivers.

Unlike the previous entry, here is a film that the whole internet seemingly can agree upon. Mad Max: Fury Road is a kick ass action film, and one of those rare action films that elevates itself above what that moniker normally entails. Breathtaking stunts, intense car chases, and energetic gunfights are all captured beautifully. And the blistering fast and brilliantly executed editing alone makes Mad Max a verified action masterpiece. Even more impressive and exponentially more rare is the film’s ability to tell a compelling and thoughtful story. Every once in awhile there is a decade-defining action film that rises above the others by giving the audience more than a collection of cool action scenes. These films deliver good characters with arcs, compelling worlds to explore, and gripping plots where the success or failure of the heroes really matters. Die Hard is the defining action film of the 90’s (released in ’88, I know) and the Matrix is the defining action film of the 2000’s (released in ’99, I know). Now we have Mad Max to define, reinvigorate, improve, and elevate the action genre in the 2010’s. 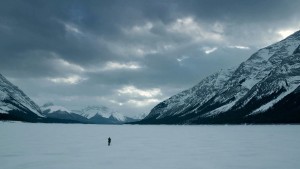 A visual and aural masterpiece, The Revenant is an artistic exploration of the endurance of the human spirit, survival, and revenge. Leonardo DiCaprio gives a fantastic performance that will likely net him the Oscar he’s been seeking for years. Tom Hardy (Bane from Dark Knight Rises) and Domhnall Gleeson (Ex Machina, also one of those Weasley kids in Harry Potter) are equally excellent in supporting roles. The story is a simple one – during a fur trapping expedition in the snowy wilderness of 1820s Montana – Hugh Glass (DiCaprio) is mauled by a bear and left for dead by his crew. The film’s presentation – minimal editing, long takes, and a steady sure camera enhance the film’s singular focus and drive. The outdoor photography perfectly captures the majesty and cruelty of nature in the most scenic and beautiful of locations. The dreamlike visuals and hauntingly perfect music score lend the entire journey an epic and poetic feeling. The film is a long and arduous voyage filled with heartbreak, misery, rage and violence. But it’s also filled with sublime moments of awe and beauty, and is ultimately worth every second of the trip.

In an effort to be transparent about all the films that were in contention for my top ten spots – I will list everything I’ve seen from 2015 that didn’t make the cut below: