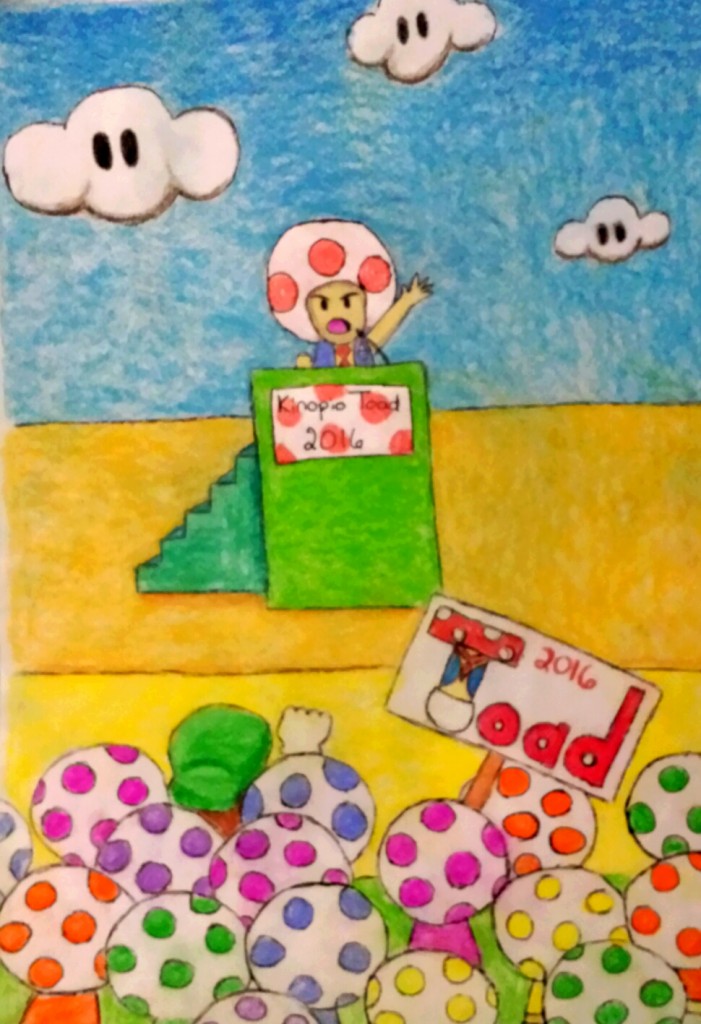 Senator Toad at a recent rally (Art by C. Hedley)

Amid the race for the White House in 2016, Mushroom Kingdom Senator Kinopio Toad called for more attention to be paid to the Gaming Party in which he and several others are vying for the nomination of.  Although his campaign started months ago, along with other hopefuls such as Bubsy Bobcat, Stanley the Bugman, Slippy Toad, and a literal Skeleton from Hyrule, it’s only just now beginning to gain some momentum.  “Heh-ha! It’s been an adventure!” cracked Toad at a recent rally for the Toad Labor Union.  “I’m running for President to help this country stay on track.  Parts of it are working great, but some parts have me saying ‘Ohhh no.'”

The Gaming Party currently has 38 candidates hoping for the nomination.  Nearly all of them are polling at 0.5%.  “It’s a tough world out there.  Not like those good ol’ 1-1 days.”  When asked about his rumored running mate being Senator T. Yoshisaur Munchakoopas, Toad scoffed.  “Hrmph!  l can assure you the Mr. Yoshisaur and I are not running together.  His personal affairs are rather…well let’s just say he’s on his own adventure right now and his tongue seems to get tied more often than not.  Who asked that question?  That’s a bit O.B. my friend.”

After seventeen phone calls to the Munchakoopas residence for comment, the clearly inebriated Senator answered and slurred into the receiver.  “Gohfakurself.”  The line was quickly disconnected after.