Steam Sales or: How I Learned to Stop Worrying and Keep Buying Games 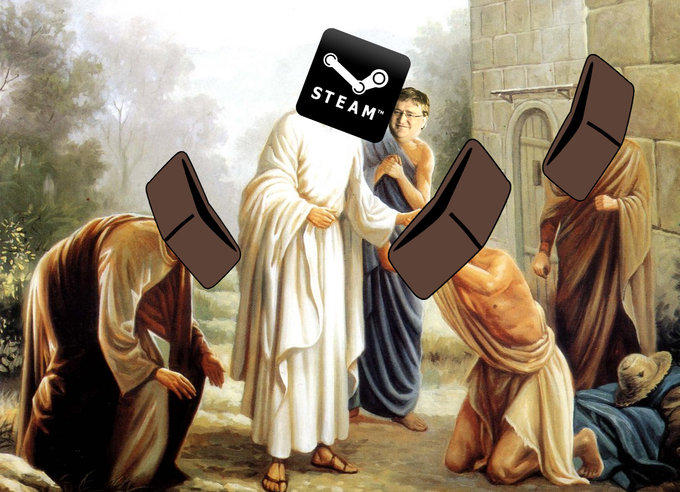 As 2015 comes to a close, Steam gazes upon our wallets and says, “Lo, give me thine money.”  And so it was that another Steam Winter Sale commenced.  But this got us thinking: how many times have we seen a cheap game and thought, “Oh man, five dollars for this?? Perfect!”  Then purchased it, only to have it sit in our collection for years untouched, uninstalled, and forgotten.

We decided to look through our games list and see exactly how depressed we could make ourselves in a span of fifteen minutes.  You can read about it below, but first: what about you?  Take the poll and tell us where you land.  If you’re unsure, there’s a handy website you can use that literally shows you how much money you’ve spent.  It also shows the number and percentage of games you have not played, which, let us tell you, hurts.

I have 47 goddamn games I’ve never opened.  Forty-seven.  The total account value (101 games) comes out to 350 bucks, which is surprisingly cheaper than I expected for that many games.  But clearly, almost HALF of them should never have been purchased in the first place.  I own Warhammer 40,000: Dawn of War, which I apparently bought on September 10th of last year, and I have absolutely no recollection of this. None.  What did I even pay for it?  More importantly, why? Why did I buy it?  What is Dungeon Defenders and how is it in my library?  I wasted four hours with Toki Tori and twenty-four pointless hours with Starbound, but Bioshock, a game I acquired back in 2009?  Nah, that can just sit there.

What is wrong with me.

It was tough creating the response tiers for this poll since I inherently prefer to think of myself as a frugal and budget-conscious person.  But owning 54 games in my library that I’ve NEVER PLAYED is too sad to ignore.  I deserve to be in the saddest of sad echelons of the PC gaming world, because after you own 50 games that you haven’t even played, why bother counting any further?  Half-Life 2: Episode Two, The Walking Dead: Season Two, The Stanley Parable… pshhhhhh!  Who has time for those games when I could dump another 12 hours into Infinite Crisis or Uplink?  But wait, it looks like Car Mechanic Simulator 2015 is on sale for 55% off.  I would like to learn more about cars (*help me…..*).

Wow, man. You guys have a problem.

Of course, I’m a console bro, not PC master race, so Steam has always been a side dish for me. Or like Olive Garden – I go there sometimes for something just a *little* special, but mostly I’m using my dependable oven and microwave.

That’s probably why I have only 19 games on my account I’ve never played. Most of them are little $1 or $2 jobs with hilariously bland names like Alpha Prime or UFO: Afterlight. Actually, my biggest regret looking at this now is the 31 hours I sunk into Starbound. Man, I really wanted that game to be good.

Otherwise, though, this thing is amazing proof of the deals that Steam gets me. I got Portal for two dollars. Two goddamn dollars. I picked up season one of The Walking Dead for just over six. Hell, I grabbed Psychonauts during a Steam Summer Sale for ONE DOLLAR, which I can see from this app means I got a price/hour ratio of 0.06. Praise be to Gaben.

Don’t forget to let us know in the comments what specific games you’ve yet to play as they gather digital dust in your account.  Reveal your shame, as we have.

4 thoughts on “Steam Sales or: How I Learned to Stop Worrying and Keep Buying Games”