It’s finally time. After months of hype, Marvel is finally releasing a show that I can get excited about. Here’s a thing: I watch shows based on word-of-mouth. If a friend comes to me and says “check this out,” that is when I queue it up on my laptop. Now, I haven’t heard zip concerning Marvel’s previous television efforts, Agents of S.H.I.E.L.D. or Agent Carter, although the online buzz surrounding Carter suggests it’s underrated. Marvel’s Daredevil? I had a friend messaging me about it inside of 48 hours. So you can say I went in with some high hopes.

So let’s get started. First of all, I’m a fan of the stripped-down proto-costume. Clearly inspired by Matt’s urban duds in Frank Miller and John Romita Jr.’s Daredevil origin story The Man Without Fear, the simple, all-black outfit goes a long way in communicating that this is not an agent of S.H.I.E.L.D. It’s like something you would throw together after some quick shopping at K-Mart.

Quick thing here, it’s pretty surprising to me that Marvel actually, officially, named this show “Marvel’s” Daredevil. We know, Marvel. We know it’s yours. Geez, this is nearly as bad as Dragon Ball Z’s heyday, when FUNimation would throw the “trademarked” symbol behind each character’s name in video game character select screens. 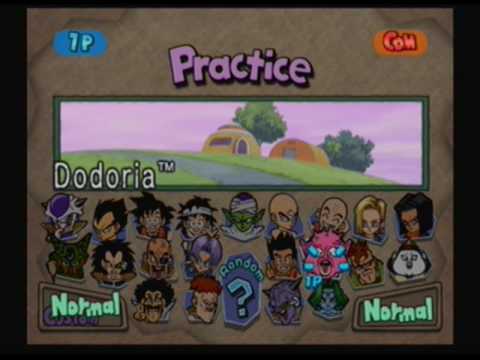 Can’t have anyone thinking they can run off with that valuable Dodoria IP!

Though the show is eager to let you know the name of the company holding the rights to the characters, it’s surprisingly mischievous about the name of its prime villain. “We don’t say his name,” his slick, yuppie appendage Wesley says during a meeting of criminal oddballs. Apparently, Voldemort is moving in on NYC’s crime rackets. Still, I’m loving the buildup. Wilson Fis – I mean, He-Who-Must-Not-Be-Named is being hyped as this incredible criminal presence, Marlon Brando’s Godfather meets the unseen Wizard of Oz in WoO‘s first half, and I won’t lie, it’s totally working.

You know who Marlon Brando could have played really well? Superman’s dad. I don’t know, I just thought of that.

So let’s jump in on some actual characters. When the show opens, we can see nothing of importance. We’re treated to the back of a man’s head, who will soon turn out to be the father of young Matt Murdock (and future Daredevil), as the sounds of NYC blast around him. The first few seconds of the show are all about sound, a creative decision that will continue throughout this episode.  As Jack Murdock gets closer to the action, we stumble with him onto a scene of destruction, with overturned cars and bloody people and young Matt at the center. It’s just a great introduction to Matt’s world, a cacophony of voices in shock and pain, all this misery just surrounding our overwhelmed hero.

The most affecting part of this scene, though, is young Matt’s panic at losing his sight. In 2003’s Daredevil film (which I somehow made it through five whole paragraphs without referencing, so, one Foggy Nelson plushy doll for me please), this event is sort of glossed over. Child-Matt is eerily docile concerning the loss of his sight, giving the event a feeling more like he was sprinkled with superpower-causing fairy dust that wasn’t so totally awesome rather than affected by a traumatic accident. Here, young Matt is screaming, and there’s no getting around it: that’s probably exactly what any of us would be doing in that situation. 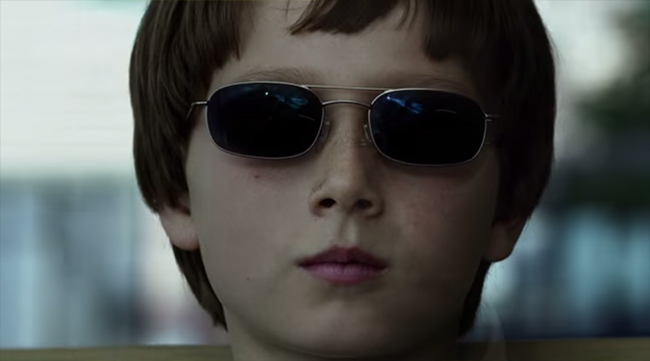 “Like so many blind people before me, I must now enter the Matrix.”

We move on from this incredible opening scene and after slogging through a very “Look Ma, I’m monologuing” bit in a confession booth, we come to Daredevil’s first attack on NYC’s organized crime. They’re grand first targets. “You be quiet, I’ll let you have a bucket,” the show’s first real son-of-a-bitch says to a gaggle of young women about to be loaded into a cargo container. This human trafficker is so comically evil that you can’t help but enjoy it when Daredevil leaps down and breaks his nose. The first fight scene is good – brutal and messy. Matt’s movements are graceful and practiced, but not superheroically effective, and it really tells the story of where he is at this point in his career. 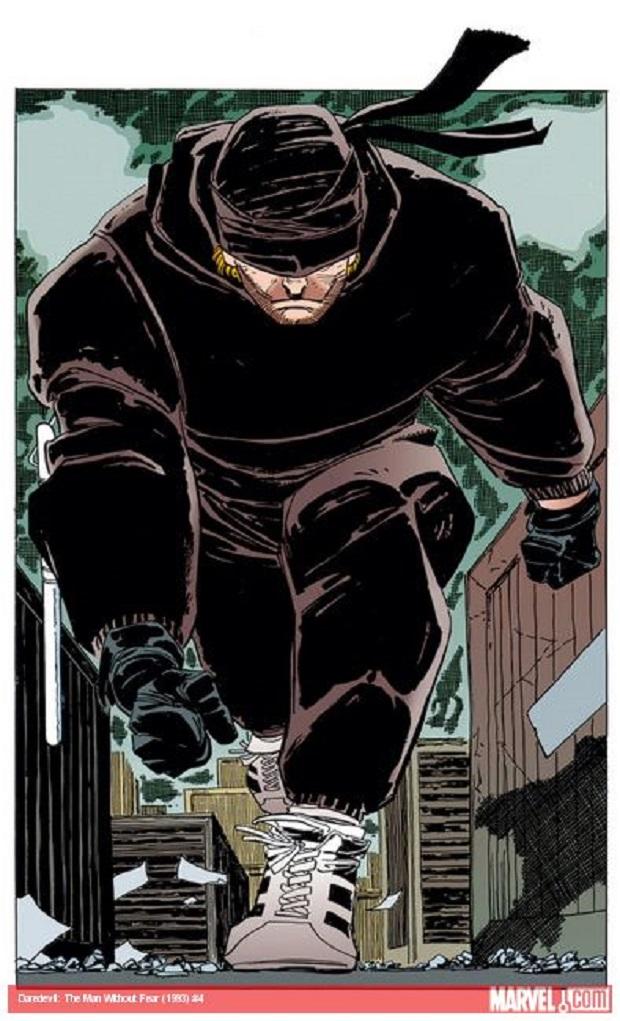 And then – YES. He ricochets the billy club. I fucking love it.

One fantastic twist in this iteration of Daredevil is their version of Foggy Nelson. Normally a bumbling, lovable goofball, here he’s been tweaked into a cynical and sarcastic realist. He’s like the old Foggy Nelson’s cool son, the one who had to make do with less when his father lost a lot of money investing in horse farms or some nonsense. Elden Henson’s childish wisecracks are the perfect counterbalance to the show’s dark tone. His scenes soon had me saying T.G.I.F.: Thank God, It’s Foggy.

Later, Foggy loses his engagement ring and finds it again on his finger. So, yeah, Foggy Nelson circa 1980, everyone.

I love how the show’s messy, brutal tone carries over into the way they treat Matt’s blindness. You can see the real estate’s physical discomfort as Matt takes her arm so as to be led around their potential office space; later, Matt asks their first client, Karen Page, a question and as an answer she forgetfully gives him a nod. A confused, uncomfortable silence follows. 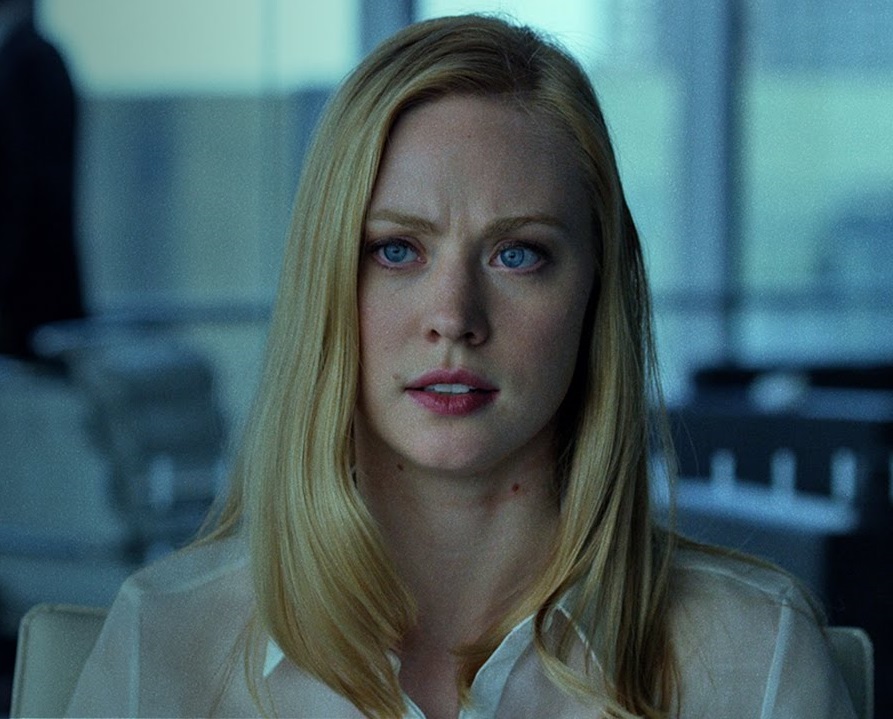 “Say something, you sightless asshole.”

In fact, let’s talk about Karen Page for a second, because she’s fantastic. There came a point where I was starting to get worried about Daredevil‘s female representation. The Daredevil comic book has historically been a solid ground for creating or co-starring strong women (a pre-Avengers Black Widow, rape survivor Becky Blake, and comics ninja sweetheart Elektra, just to name a few). Now, Deborah Ann Woll has the acting chops to instantly draw you into the character she’s creating, and it doesn’t hurt she looks like Amanda Seyfriend and Game of Thrones‘ Sansa Stark fused into one beautiful-yet-somehow-regular-looking human being. But character Karen Page, caught up in a corporate embezzling plot, looked at first to be the latest in a take-a-number damsel-in-distress crew that was being run ragged through the show.

However, that all changed when she survived her own murder attempt. When that burly security guard comes in to strangle her in her jail cell, I was waiting patiently for Daredevil to come to her rescue; what I did not expect was for this untrained, non-superpowered working girl to reach up, scratch out one of his eyes, and gather her breath for a scream. It’s a powerful scene, a woman saving herself without any Scarlett Johansson-style acrobatic martial arts to justify her agency in the plot. It shows that you don’t need to give female characters a Wonder Woman-perfect attitude or Anne Hathaway’s fighting skills to let them have some control over their destiny, even in a superhero flick.

So let’s talk about Karen and Matt. Or rather, the lack of Karen and Matt, and the show’s considerable restraint in not mooshing the two together romantically. Afraid for her life, Karen ends up spending the night at Matt’s depressingly drab apartment (and hats off to Daredevil for being perhaps the first NYC-set TV show in recent memory to explain the character’s relatively extravagant digs). Though the show doesn’t demur from spicing up the scene – first putting Woll in a wet T-shirt and then having her quickly switch into one of Matt’s button-downs – it stops short of teasing an overt romance. Although the room may have felt a bit warm for both characters, the tone is more of two people beginning to become friends. “How do you comb your hair?” she asks the blind lawyer at one point. “Honestly, you just, you hope for the best,” he replies.

It was at this moment I realized how fuggin’ likable Charlie Cox’s Matt Murdock is. Normally a pretty dour guy in his comic appearances (an emotional black hole in Ben Affleck’s interpretation), Cox gives the sense that Matt is just a beat or two away from being just a dude, someone you know down the street that you could get a beer with. Much like Foggy’s cynical turn on the show, it’s a welcome twist from the usual portrait of the character, and helps to invest me in Murdock’s activities at a point when the show is reluctant to give out even minor details on his backstory. 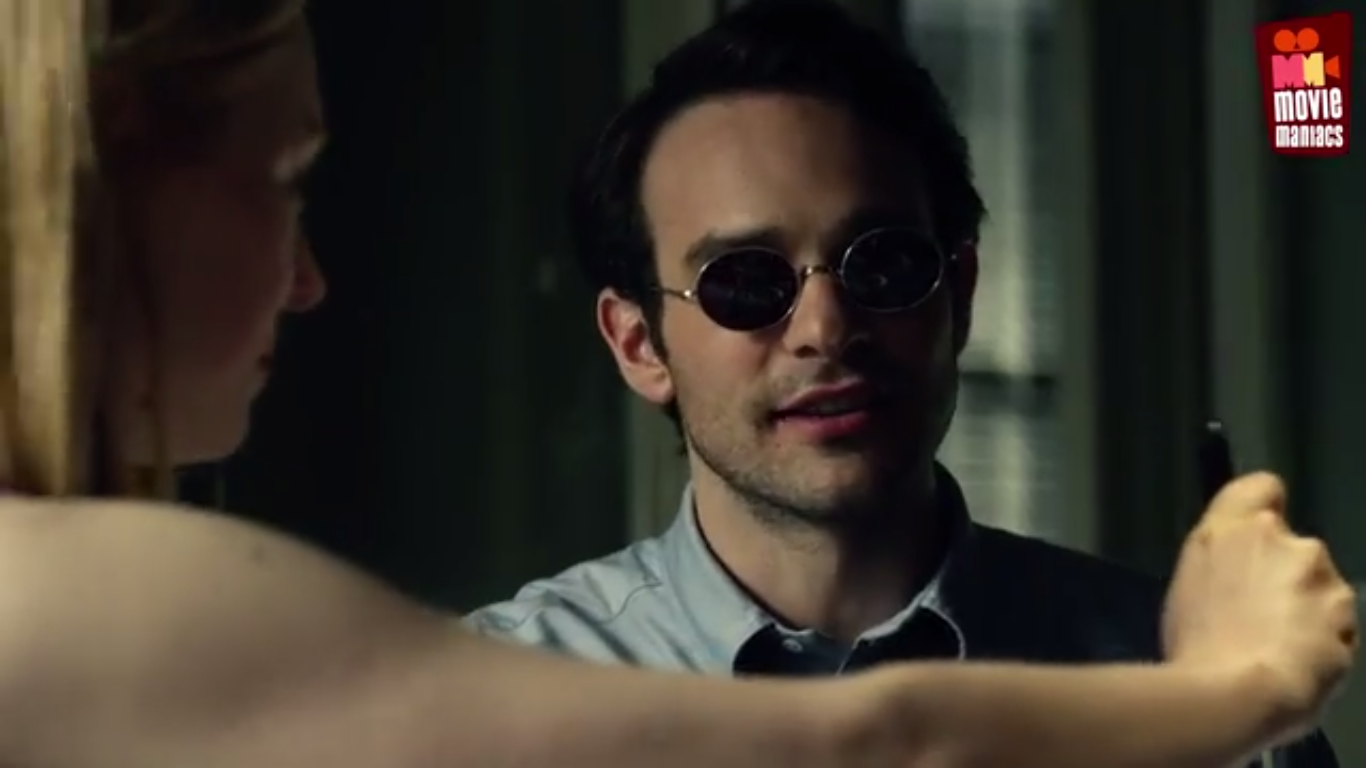 “So he said, ‘you can take the red pill or the blue pill’ and I said ‘actually I’m gonna take your glasses.'”

When Matt Murdock does go all Daredevil again at the episode’s end, though…oh man, it’s the best. No gymnastics or fun quips for this guy. It’s a nasty, ungainly fight between him and a hired killer, and the two men batter each others’ bodies for what feels like an eternity.

During the fight, one has to enjoy how Daredevil plays with the senses. Ironically for the blind hero, this may be visually Marvel’s most daring effort. And the way the show has opted to portray Matt’s enhanced senses by emphasizing sounds in the scene, rather than with fancy “radar” effects like in other Daredevil media I could name (but won’t) (again), gives the show an incredible tone. 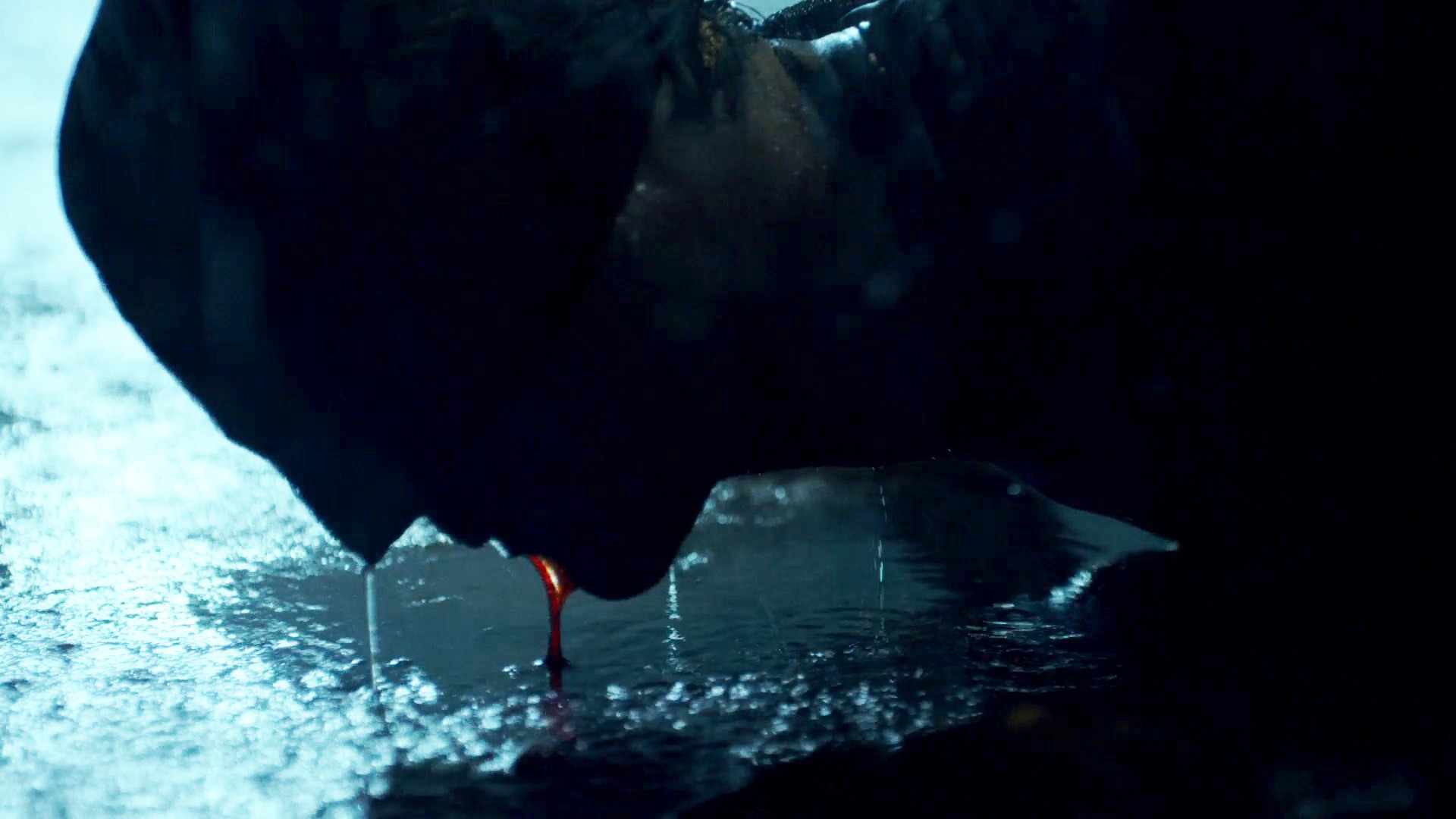 Bottom line: despite some really messy plot dumps in the dialogue, the creative decisions of the show and a stellar cast give Daredevil some very strong promise in its first episode. If you’re a fan of superheroes, crime noir, or foot-in-mouth moments around the visually impaired, I highly recommend checking this out.

2 thoughts on “Marvel’s Daredevil: Season 1 Episode 1 “Into the Ring””